Janhvi Kapoor is all set to step into the shoes of first female IAF officer Gunjan Saxena, and from the reviews on the internet seems like the fans can't wait!

Janhvi Kapoor is all set to step into the shoes of first female IAF officer Gunjan Saxena, with her much-awaited biopic. The first look of 'The Kargil Girl' was released in the morning today, that has left fans and netizens in a tizzy. Fans are waiting with bated breath for the film's release and from the poster's one can say that it is sure to be a blockbuster!

Netizens rave about 'The Kargil Girl'

The three posters shared by Karan Johar featuring Janhvi Kapoor as 'The Kargil Girl' has taken the internet by storm. "Can't wait for this", "Fantastic", "Look promising", and "beautiful" ranged some of the comments that were left on the poster. Read some of the reactions below:

very impressed with the
First look of Janhvi Kapoor as Gunjan Saxena is aweeesome! #TheKargilGirl is all power! Also super excited to see Pankaj Tripathi sir with her pic.twitter.com/V4a54x8alY 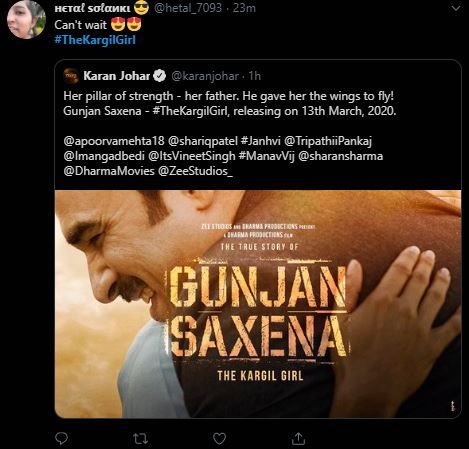 About 'The Kargil Girl'

The film is being directed by Sharan Sharma and is based on the life of first female Indian Air Force combat pilot and first female Shaurya Chakra recipient Gunjan Saxena, who played a significant role in picking the injured soldiers during the 1999 Kargil War..

Meanwhile, Angad Bedi will play Janhvi's brother in the film and child actor Riva Arora, who played late actor Sridevi’s daughter in 'Mom, will be seen playing the young Gunjan in the film.

Pankaj Tripathi was last seen in the film 'Luka Chuppi', and will now be seen playing Janhvi Kapoor’s father in the Gunjan Saxena biopic.He will essay the role of Gunjan’s father Anuj Saxena.