Bollywood actor Tiger Shroff took to Instagram and shared a poster of 'Baaghi 3' on Instagram and revealed that the film is all set to hit the theatres on March 6, 2020.

Bollywood actor Tiger Shroff made the official announcement of the making of the third instalment of his action drama film 'Baaghi' on Wednesday, December 19. The actor who has been winning hearts with his performance in the previous ventures took to Instagram and shared a poster of 'Baaghi 3' on Instagram and revealed that the film is all set to hit the theatres on March 6, 2020.

The poster of the film shows a man standing ahead of a rising sun in a dessert, and it reads "He will return." Tiger Shroff captioned the post saying, "And round 3 is on! #SajidNadiadwala's #Baaghi3 will be out on 6th March 2020. This one’s for you guys. 🤗❤️ @khan_ahmedasas  @foxstarhindi @nadiadwalagrandson @wardakhannadiadwala"

WATCH: Disha Patani And Rumoured Boyfriend Tiger Shroff Spotted Together On The Streets Of Mumbai, Twinning In Black

The actor also shared a collage of pictures from his previous franchises in his Instagram story and captioned the post saying, " Baaghi is a series that's really close to my heart and I can't wait to tell you more about it. Stay tuned..." 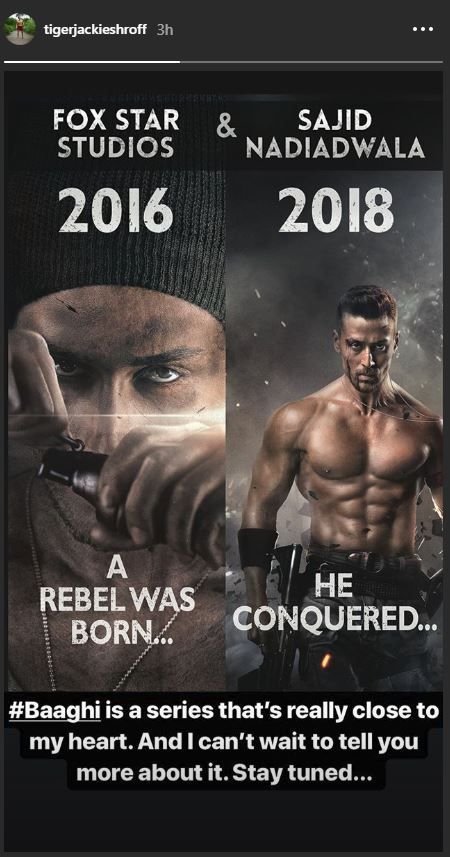 Meanwhile, Tiger Shroff is currently working with Hrithik Roshan for Siddharth Anand’s next venture which is slated to release on January 25, 2019. Apart from this, the actor is currently gearing up for the sequel to the 2012 film 'Student Of The Year'. Directed by Punit Malhotra, ‘Student Of The Year 2’ will mark the debut of Chunky Pandey’s daughter, Ananya Panday’s in Bollywood. The film which is slated to release on May 10, 2019, will also star Tara Sutaria.

According to media reports, the actor had earlier mentioned that he never uses a body double for the stunts on-screen as he doesn't like taking credits for someone's work.  Tiger, who has been a fitness freak, is very disciplined when it comes to his fitness regime and eating habits. The actor is known to maintain a healthy lifestyle and also refrains from eating out or opting for cheat days.

PEOPLE HAVE PLEDGED SO FAR
After Manikarnika Trailer Releases, Actor Tweets For 'Help' For Non-Payment of Dues
Unseen picture: Priyanka Chopra and Nick Jonas look all in smiles in this picture from their wedding festivities
'Yash and Yash and now I have one more at home!' Karan Johar remembers his father and uncle with a throwback post
Disha Patani sets the internet on fire in stunning orange bikini from 'Malang', see pic
Shabana Azmi brought to Mumbai Hospital; Farhan, Zoya, Shibani, Tabu, Anil rush to see her
Taslima Nasreen feels insulted over Neena Gupta's regret of having a child out of wedlock
After Sonam Kapoor, Esha Gupta slams an airline, calls them 'disgusting'
Imtiaz Ali says his films are his way of talking to the younger generation about love
DO NOT MISS
SHAHEEN BAGH TRUTH
KASTURI SLAMS TROLLS OVER LEWD POST
MIRZA HOPES TO INSPIRE WOMEN
MAHATMA GANDHI WANTED TO SPEND 15 AUG, 1947 IN PAKISTAN: MJ AKBAR'S BOOK
SUBRAMANIAN SWAMY SLAMS GOVT
SHAHEEN BAGH: BLOCK ROADS FOR A DAY