In his latest video, Tiger Shroff showed off his basketball skills with three consecutive baskets. He amazed several celebrities, including Dino Morea. 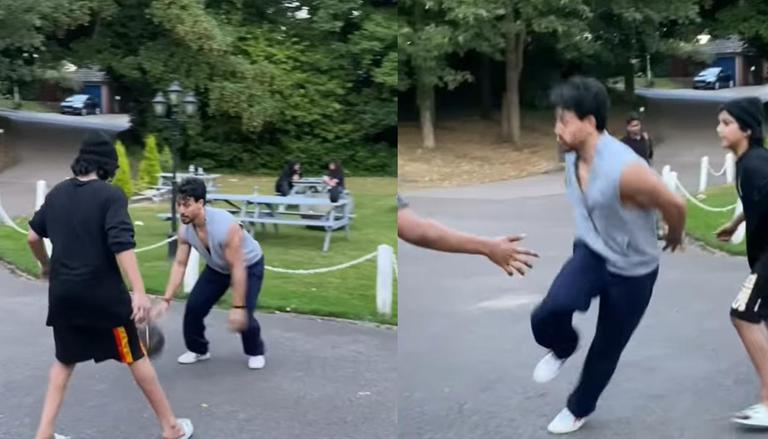 
Bollywood actor Tiger Shroff is a complete package of talent. The actor, who is also known for his dancing skills and fitness, is also a pro at basketball. In his latest video, Tiger Shroff showed off his basketball skills and managed to amaze several celebrities.

Tiger Shroff is currently shooting for his upcoming film Heropanti 2 in London. The actor has been hanging out with Sajid Nadiadwala and his production team in the UK for a while now. Taking to Instagram, Tiger Shroff recently shared a video of him playing basketball with Sajid Nadiadwala's son and Ahmed Khan's son. In the video, the actor was seen beating the two boys with his basketball skills. In the caption, the Baaghi actor wrote, "Taking my boys to school😈 @snadiadwala1 @_subhaankhan_ ❤️🏀." Tiger Shroff basketball skills caught the attention of actor Dino Morea. He praised Tiger and wrote, "Still got the lay up moves Mr T 🙌🙌." Tiger Shroff's sister Krishna Shroff liked the video's caption.

This is not the first time that Tiger aced a sport. Earlier this week, he shared a video of him playing football in a park with the producer, director and their families. In the video, Tiger scored a hattrick with three consecutive goals against Sajid Nadiadwala. In the caption, the actor wrote, "I don't think my producer is too happy with me scoring a hattrick against him, hope i don't lose my part🤪❤️." Sajid Nadiadwala's wife Warda Khan commented on the video and wrote, "Hehehe!!! What a game that was, see the happiness on his face every time u scored a goal 😀😀😀❤️ his dreams to see u scoring Hattricks in real life too 🔥🔥🔥… hey don't miss Mrs. Producers Dance on the goal 😆🤪🤣." His mother, Ayesha Shroff, also reacted to the video with a series of laughing and red heart emojis.

Meanwhile, Heropanti 2 is the sequel of Tiger Shroff's 2014's debut film Heropanti. The filmmakers and the actor announced the sequel on March 2, 2021. The film is being helmed by Ahmed Khan, while Sajid Nadiadwala is producing it. Sharing the official poster, Tiger Shroff wrote, "My first love is back ❤️ action, thrill, like never before! Lets celebrate this one together on the 3rd of december in cinemas 🥳❤️."