It has been a year since Bigg Boss 13 winner Sidharth Shukla left for his heavenly abode while leaving all his fans in a complete state of shock. 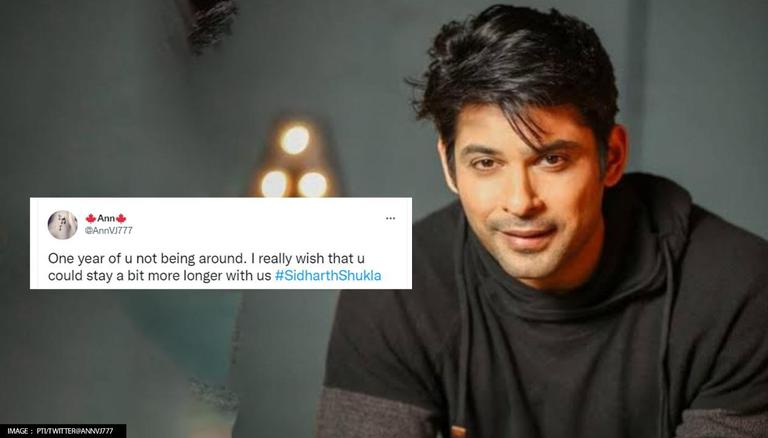 
It has been a year since Bigg Boss 13 winner Sidharth Shukla left for his heavenly abode while leaving all in a complete state of shock. The actor's untimely death has left a scar on the heart of his fans. Today, on the actor's first death anniversary, his fans from all across continue to celebrate the star and his legacy as they pull out heartwarming memories from his journey.

The undisputed actor who emerged as a force to be reckoned with in the reality show, had impressed everyone with his stint and later emerged as the winner of the most exciting season. After almost a year without his presence, fans have been recalling fond memories of the star while sending in their prayers to the family along with the late star's close friend Shehnaaz Gill.

The late popular star who enjoyed a massive fan following on social media was paid heartfelt tribute by fans on Twitter who were startled by his sudden death at 40 due to a cardiac arrest. One of the Twitter users shared the late star's picture and wrote, "@sidharth_shukla every inch every piece of my broken heart laments for you." Another user recalled the time when she got to know about Sidharth's demise. Lamenting the huge loss, she wrote, "I sure he will be happy. He is my best friend. I never cried in my life for anyone." A third user also shared an emotional post and wrote, "We miss you every day." Another netizen shared his video from the reality show and wrote, "It's been a year we didn't saw you Sidharth but we know you are in our hearts forever thank you for inspiring me."

My life dwells in nothingness with the emptiness all over the mind and soul. You are irreplaceable 💔💔💔#SidharthShuklaLivesOn #SidharthShukla#SidHearts #MissingYouSidharthShukla pic.twitter.com/GDa7Xuu2lv

I sure he will be happy. He is my best friends. I never cried in my life for anyone 🥺🥺✨
Don’t know why I am so connected with him . #SidharthShukla#SidharthShuklaLivesOn#SidHearts

It's been a year we didn't saw you sidharth but we know you are in our hearts forever thankyou for inspiring me that how i real men looks like #SidHearts Love you so much and yeah your smile🤍😭 >>>>>>@sidharth_shukla #SidharthShukla || #SidharthShuklaLivesOn || pic.twitter.com/CKjrW1LFYn

Before participating in the prominent game reality show, Sidharth had already established himself as an actor with Balika Vadhu in which he starred opposite Pratyusha Banerjee, another young actor who had a tragic demise. Apart from television, he was also a part of a few films including Varun Dhawan and Alia Bhatt starrer Humpty Sharma Ki Dulhaniya. During the show, the late star's chemistry and bond with fellow contestant Shehnaaz Shukla were also quite talked about in the house and outside. Fans loved the shenanigans of the two inside that left all entertained.