'Tuesdays And Fridays' Review: Netizens Opine 'screenplay Could Have Been Better'

As the film began streaming on Netflix, it has received mixed reviews from the audience. Here are Tuesdays And Fridays review on Twitter


Among the new releases on Netflix, another Indian rom-com recently hit the OTT platform on February 19, 2021. The film Tuesdays & Fridays is written and directed by Taranveer Singh. The film's cast includes debutants Anmol Dhillon and Jhataleka Malhotra. The film revolves around a couple who only date on Tuesdays and Fridays. The film was produced by Sanjay Leela Bhansali, Shobha Sant, and Bhushan Kumar. As the film began streaming on Netflix, the film has received mixed reviews from the audience. Here are Tuesdays And Fridays review on social media.

The film has received distinct reviews from the audience. A Twitter user wrote '#TuesdaysAndFridays on Netflix, a London luxury-romance is so light and loose in its plot and conflict, that it barely registers as a film'. Another user asked the audience not to watch the film at all.

#TuesdaysAndFridays on #Netflix. DON’T WATCH IT! 🥵🥶😭

However, the film also received some positive comments from the viewers. Nayan Shukla received a compliment from a Twitter user. The user wrote 'Congrats, @nayan_shukla! You were so natural and adorable, and impressive in the film. Kept waiting for your appearances in the scenes. You owned them all. Keep shining!!' in his tweet.

Congrats, @nayan_shukla! You were so natural and adorable, and impressive in the film. Kept waiting for your appearances in the scenes. You owned them all. Keep shining!! 👍👏👏👏 #TuesdaysAndFridays

The film Tuesdays And Fridays ratings on IMDb and Google are 5.4 on 10 and 82% respectively. Several Google users liked the film as its average rating is 3.7. A Google user wrote that the film was a 'light love story'. She then narrated about the film, saying the characters who do not match up with what they want out of love end up together. The user also said the lead characters were new and have done some decent work. Further, she said the end of the film was predictable. At the end of the review, the user suggested watching the movie and called it a 'one-time watch'. Another user had almost the same reviews and wrote the screenplay could have been better. The user also called the film a 'one-time watch' film. Both the users gave the film three stars. 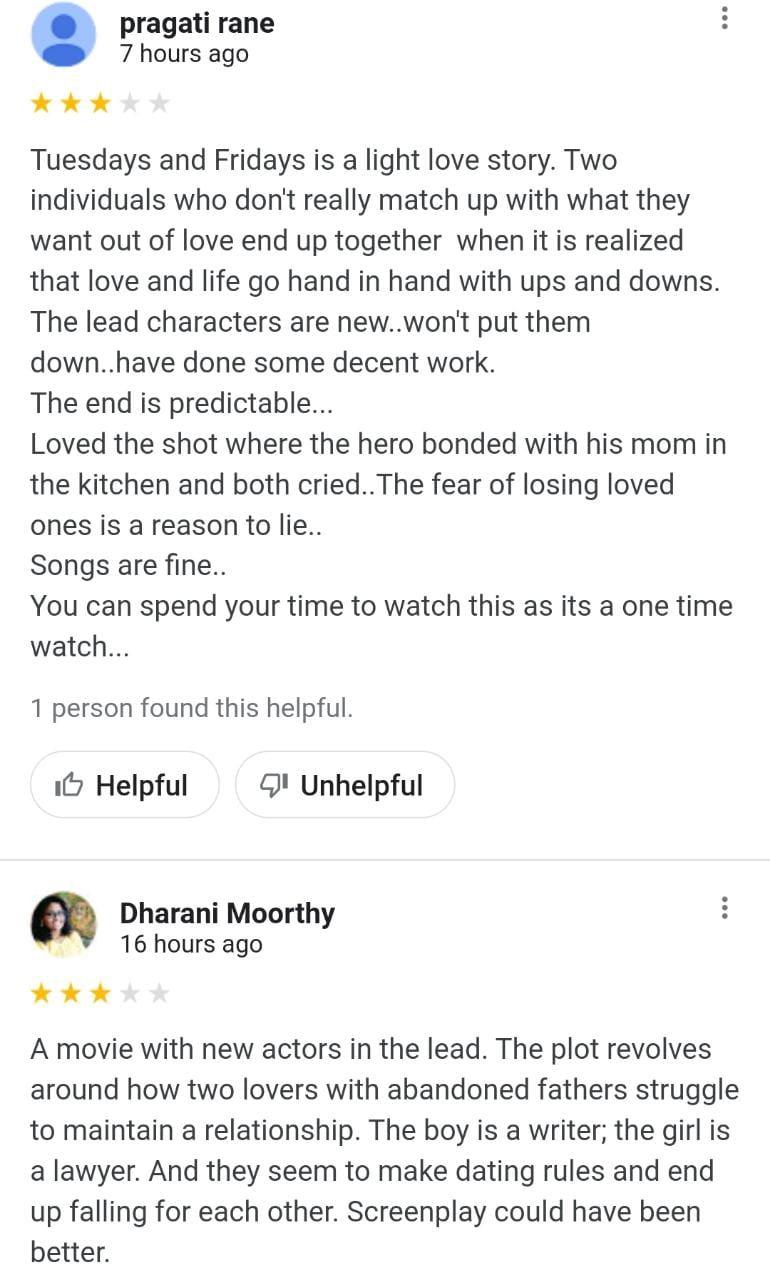 READ | Like Gangubai Kathiawadi, 5 other Sanjay Leela Bhansali movies that ran into controversies
READ | SLB's next 'Tuesdays and Fridays' to release on a digital platform due to Coronavirus?
READ | 'Tuesdays And Fridays' Trailer Review: Jhataleka Shines Brighter Than Anmol Dhillon