Tusshar Kapoor took to his social media to share a glimpse into his surprise birthday party thrown by his son Laksshya. Check out the videos below. 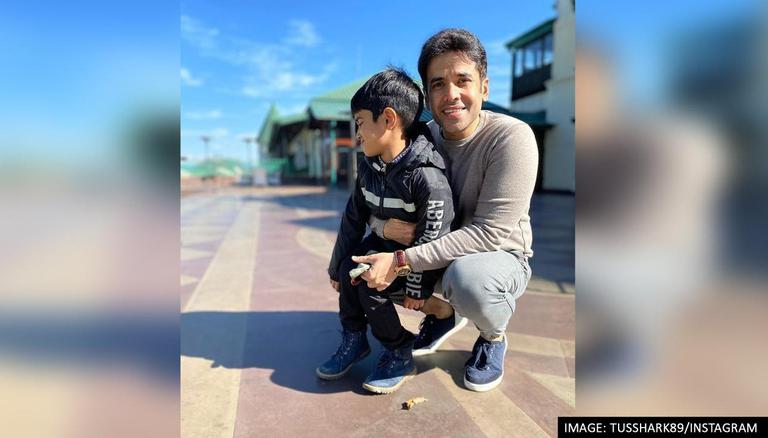 
Actor Tusshar Kapoor turned a year older on November 20 as he celebrated his 45th birthday. On the special occasion, the actor received an outpour of wishes and blessings from his fans and Bollywood fraternity alike via social media. However, his son Laksshya throwing a surprise birthday bash definitely took the cake.

Taking to his Instagram on Saturday, the actor shared a glimpse into his son's surprise birthday party for him. His happiness reflected in his caption as he wrote, "Surpriseeee…the best surprise party in the world! Look who threw one for me! #birthdaysurprise #simple #son #birthdaysarechallenging #makingthecut[sic]." In the video, the 5-year-old can be seen opening the curtains to a lovely setup decorated with balloons and a cake.

The actor appeared delighted to receive the surprise as he cheered for his son and thanked him wholeheartedly. He was also presented with an oreo flavoured cake which the duo devoured together. Furthermore, the toddler gifted his father a handwritten letter which the actor kissed to show his gratitude. Lastly, Tusshar shared a video showing the lego house gifted to him built by his son.

READ | Tusshar Kapoor opens up about nepotism and groupism present in Bollywood; read

READ | Tusshar Kapoor shares throwback pic on Insta; asks fans to guess the film it is from

The Golmaal actor received birthday wishes from across the nation via Twitter. Many celebrated his birthday sharing some of his iconic scenes from his films especially his memorable role in the Golmaal franchise as Lucky. One user wrote, "Wishing #TussharKapoor a very happy birthday! We wish your year ahead be filled with smiles! We cherish our experience working with you in #Laxmibomb[sic]." His sister filmmaker Ekta Kapoor also shared a doting wish on Instagram by writing, "Happie bday my brother friend inspiration support n Thanku for being everything I wanted ravie to have as a male care giver ! Ur d best dad son brother n human @tusshark89[sic]."