As 'Sooryavanshi' has finally made its way to the cinemas, Akshay Kumar's wife Twinkle Khanna took to her verified Instagram handle and penned a special note. 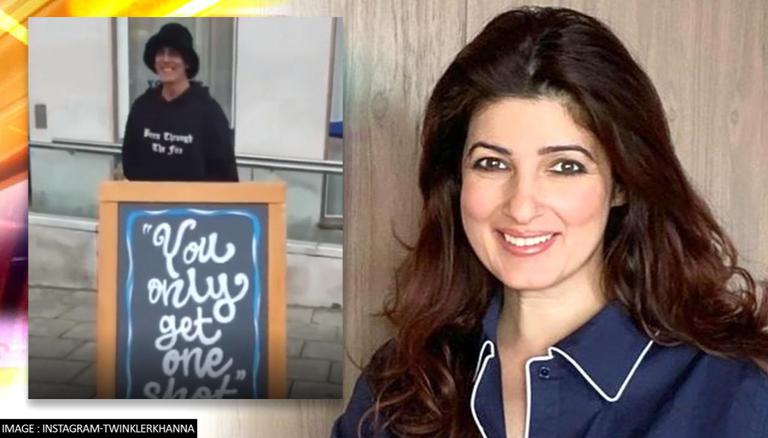 
Rohit Shetty's directorial venture Sooryavanshi, which was scheduled to release almost one-and-a-half years earlier, was delayed due to the COVID-19 pandemic. However, one of the most anticipated Bollywood films has finally hit the big screens on November 5. Since the theatrical business has massively been impacted by the pandemic and its subsequent lockdown, it is expected to get back on track with the Akshay Kumar-starrer.

Today, as the film has finally made its way to the cinemas, Akshay Kumar's wife Twinkle Khanna took to her verified Instagram handle and penned a special note for the film and her actor husband. She dropped an adorable video featuring Akshay. Watch the video below.

Taking to the photo-sharing site, Twinkle Khanna posted a video featuring Akshay Kumar. In the video, he can be seen joyfully dancing as the action-packed film finally made its way to the big screens. He opted for a casual look as he wore a black oversized hoodie and loose pants. He added a matching hat to complete his look.

READ | 'What The Heck': Twinkle Khanna hilariously describes her marriage with Akshay Kumar

As for the caption, Twinkle wrote, "And it is a blockbuster Diwali for Mr K and the box office! Fabulous opening Repost @akshaykumar Pardon the goofy gig am overjoyed! Thank you SO much for embracing cinemas back in your lives. The super response is not just for Team #Sooryavanshi, it is a mark of faith that’ll bring joy and prosperity back in our film industry. We are nothing without you. Sheer gratitude."

READ | Twinkle Khanna on argument with director who told her to do a Mandakini; 'it was horrible'

Sooryavanshi is the fourth outing of director Rohit Shetty in his Cop-universe. The film's plot will revolve around DCP Veer Sooryavanshi, portrayed by Akshay Kumar, Chief of Mumbai's Anti-Terrorism Squad. Singham and Simmba will join him while preventing a terrorist attack on Mumbai. The makers have released two songs from the film- quirky fun track, Aila Re Aillaa, and a romantic track, Mere Yaaraa.

The peppy song Aila Re Aillaa shows Akshay's Sooryavanshi flaunting several wacky dance moves, surrounded by other members of the police force, dancing with guns, torches, and shields. On the other hand, Mere Yaaraa is a romantic track featuring Akshay Kumar and Katrina Kaif. The music video shows them building a perfect life together. Crooned by Arijit Singh and Neeti Mohan, the lyrics of the romantic song are penned by Rashmi Virag. The track's music is composed by Kaushik-Guddu and Akash.