Dhoom actor Uday Chopra seems to have a great sense of humour. Recently the actor took to his Instagram to share a hilarious meme. The meme showcased a picture of a loved-up couple being intimate. However, Chopra showcased a completely different angle. He seemed to relate more to the man in the background who appears to be looking at the loved-up couple. Further, the man also appears to be single. Uday Chopra’s meme read, “THIS SUMMARIZES MY LOVE LIFE, I AM THE GUY IN BLUE”. 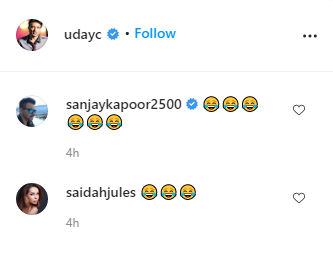 Uday Chopra often shares motivational posts on Instagram. Recently the actor shared an Instagram post about astrological beliefs. Uday’s post asked people to rely on their own destiny. His caption read, “Either way we’re master of our own destiny. A little self-acquired strength or solace from outside beliefs just makes the journey easier to face one’s responsibilities. #justmythought”. Several fans liked Uday Chopra’s Instagram post. Further, the Koi Mil Gaya actor Hrithik Roshan was not an exception to this. You can check out Uday Chopra’s Instagram post here:

ALSO READ: Kajol's 'Me When I' Meme Series Has A Hilarious Take On Proposal Of A Handshake; See Pic

Uday Chopra made his acting debut with the 2014 romantic drama, Mohabbatein. However, prior to that, Chopra had produced the 1994 Bollywood romance film Yeh Dillagi. Uday Chopra is well known for his role in the Dhoom franchise. Further, he has also starred in films like Mere Yaar Ki Shaadi Hai, Neal 'n' Nikki, and Mujhse Dosti Karoge! Chopra has also worked as an assistant director in films like Dil To Pagal Hai, Dilwale Dulhaniya Le Jayenge, and Lamhe.

ALSO READ: This Day That Year: Anil Kapoor Reacts To His FaceApp Memes; Calls Them 'flattering'

WE RECOMMEND
2 weeks ago
Hrithik Roshan has a better chemistry with Preity Zinta or Kareena Kapoor Khan on-screen?
2 weeks ago
Parineeti Chopra’s throwback video dancing to 'Sharara Sharara' will leave fans nostalgic
3 months ago
Uday Chopra is television actor Roshni Chopra's uncle; read about their family connection
1 month ago
Hrithik & Aishwarya's 'Dhoom 2' or 'Jodhaa Akbar', which movie did audience love more?
3 months ago
Unseen Pic of the Day: When Hrithik Roshan stood on top of Uday Chopra
LATEST NEWS
View all
9 hours ago
Rajkummar Rao shares a glimpse of the 'Shatranj Ke Khiladi' in the house; See post
7 hours ago
Arjun Rampal's 'Throwback Thursday' post has a 'Joker' connection, Check it out
8 hours ago
Samuel Miranda's neighbour claims, 'Mumbai Police asked him not to speak to anyone'