Urvashi Rautela Dons A Regal Gown Worth Rs. 40 Lakh For A Fashion Event

Bollywood actor Urvashi Rautela recently walked down the ramp of international designer Michael Cinco in a gown that was worth Rs. 40 lakh. 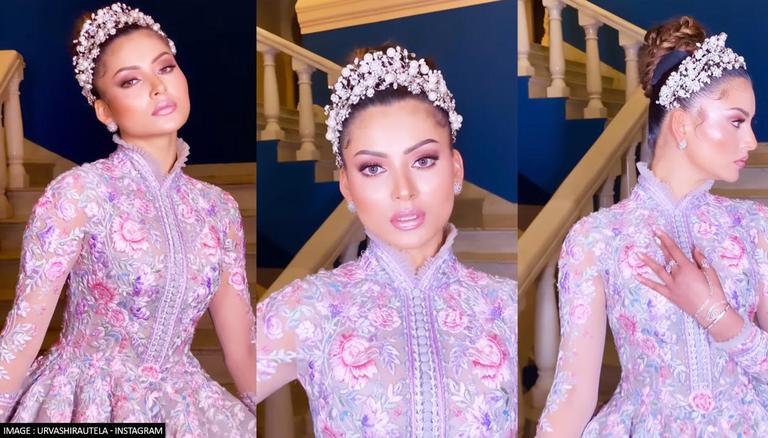 
Urvashi Rautela makes fashion statements thorugh her photoshoots and public appearances. The model-turned-actor is quite active on social media and never fails to grab the attention of the audience. Rautela is always at the top of her fashion game and has proven yet again that she can pull off any look. The actor recently strutted down the runway for designer Michael Cinco in an embellished gown worth Rs. 40 lakh.

Urvashi Rautela took to her Instagram and shared videos as she walked down the runway wearing designer Michael Cinco's creation. The dress was a huge ball gown adorned with lavender, pink and white flower pattern, the actor used a jewelled tiara in her head to complete the look. The dress that Urvashi wore was worth Rs. 40 lakh. Rautela was also joined on the stage by comedian and actor Sunil Grover, the designer Cinco also took to his Instagram and shared a picture of Grover and Rautela.

As he shared the picture, Cinco wrote for the Hate Story 4 actor, "Thank you JAIPUR, INDIA for a spectacular and magnificent show…Thank you to the kindest Bollywood superstars @urvashirautela and @whosunilgrover for gracing my show."

Urvashi Rautela recently signed a deal with India's short video maker app. The online platform allows users to forecast their talents to the whole world. The video app lets users follow their favourite entertainer for good fun and entertainment. Meanwhile, Rautela will be soon seen in the Jio studios crime thriller web series Inspector Avinash opposite Randeep Hooda in a lead role. The actor is also set to play the lead role in a bilingual thriller film Black Rose along with the Hindi remake of Thiruttu Payale 2.

The actor was also recently seen in the music videos of the songs Doob Gaye opposite Guru Randhawa and Versace Baby opposite Mohamed Ramadan. Rautela is also set to make her Tamil debut with the 200 crores big-budget film The Legend opposite Saravana. The actor has also signed an exclusive three-film contract with Jio Studios and T-Series.