Model-actor Urvashi Rautela hosted an AMA session on her social media handle and a fan asked her to name her favourite cricketer; here's what she answered.


Model-actor Urvashi Rautela, on Wednesday, took to the story session of her Instagram handle and hosted an 'Ask me Anything' session for her 35.4M Insta fam. Interestingly, a follower of Urvashi asked her to name her 'favourite cricketer'. Meanwhile, the model-actor decided to answer the query of her fan and responded to it. In her reply to the question, Rautela wrote, "I don't watch cricket at all / so don't know any cricketers". However, she further added that she has a deep respect for former cricketer Sachin Tendulkar and current captain of Indian cricket team Virat Kohli. 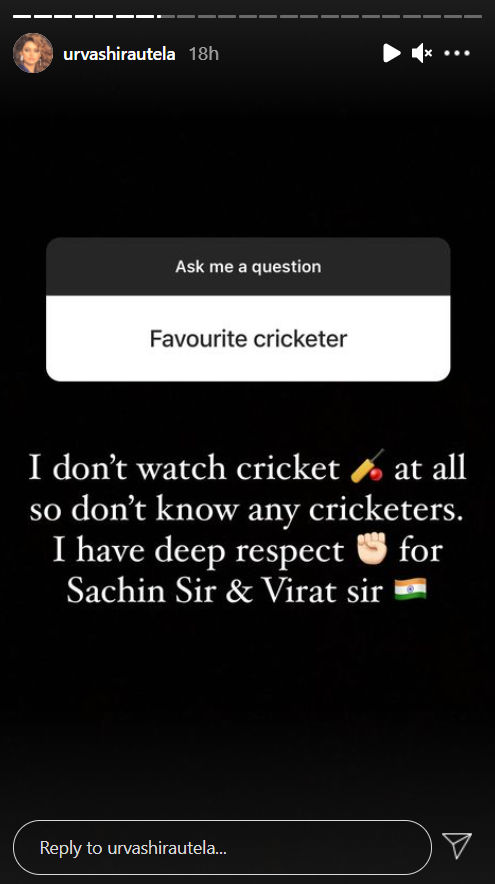 Presumably, a section of fans was expecting cricketer Rishabh Pant's name as Rautela was rumoured to be dating him at one point, back in 2018. As per a report of Pinkvilla, Rishabh had blocked Urvashi on WhatsApp. And the same report quoted Urvashi’s spokesperson, who said that it was a decision taken by both parties to block each other on the popular messaging app.

On the other hand, amid the rumours of his relationship with Urvashi, Rishabh had made his relationship Insta-official with Isha Negi. While sharing the post, the cricketer had written, "I just want to make you happy because you are the reason I am so happy" in his captions. Rishabh Pant’s girlfriend Isha Negi had also shared the picture on her Instagram handle and had written, "My man, my soulmate, my best friend, the love of my life".

Interestingly, apart from the above, a handful of fans asked numerous questions to the Miss Universe 2015. A fan of her asked her to reveal the name of her crush, to which, she answered Elon Musk, the CEO of Tesla Motors. Meanwhile, a fan of her expressed that she wants Rautela to collaborate with actor Aishwarya Rai Bachchan. However, Rautela poked fun at her and asked who will shoot amid the lockdown.

READ | Why did Rishabh Pant block Urvashi Rautela? Throwback to when they were an alleged couple

On the professional front, the 27-year-old model-actor was last seen in ZEE5's original film, Virgin Bhanupriya. In January 2021, she had informed about her upcoming film, titled Inspector Avinash, with actor Randeep Hooda, via an Instagram post. "According to me biopics are a great challenge for me as an actor instead of creating a character from nothing, I have to portray a version of a real person on screen. Bringing someone else's story to life is a big responsibility, but that also helps a real-life person's story be told", an excerpt from her caption read.

READ | Urvashi Rautela shares video of her dog sleeping on her gown, fans are ‘all hearts’