Urvashi Rautela has often made headlines over her alleged relationship with Indian cricketer Hardik Pandya. However, the actress has finally decided to take matters into her hands by posting a story on Instagram urging media channels on YouTube to stop uploading 'ridiculous videos' on her relationship status. Posting a screenshot from one of the videos on the platform, the 'Sanam Re' actress emphasized that such stories are disheartening for her family and should be stopped immediately as nothing of the sort is on the cards for her.

The video from which the screenshot has been posted on Rautela's Instagram story refers to her alleged relationship with Hardik Pandya. Captioning a still of her and the Indian cricketer, she wrote, "I would humbly request respective media channels to YouTube to stop uploading such ridiculous videos as I have a family to answer and it creates problems for me,"

READ: Urvashi Rautela Slams At Her Ex-publicist, Accuses Him Of Trying To Assassinate Her Character 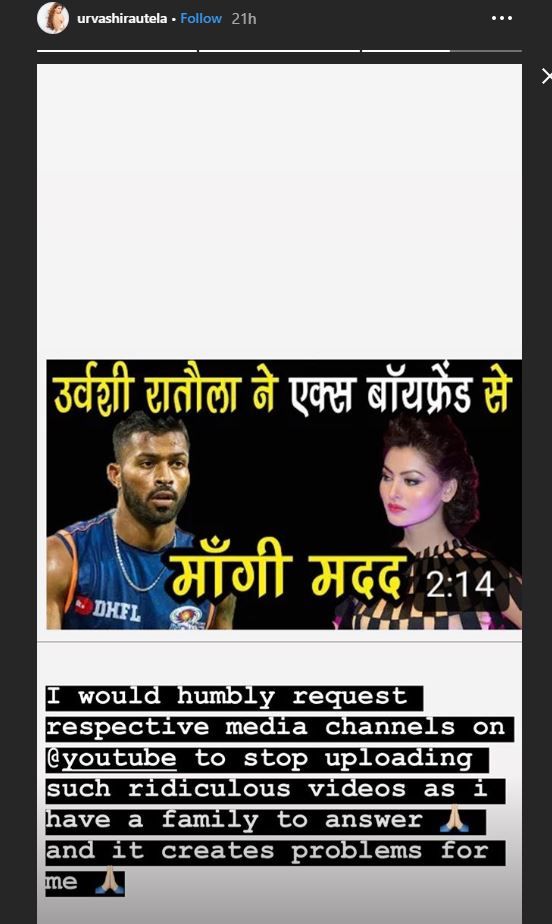 For the uninitiated, various media reports suggested that Rautela met Hardik and his brother Krunal during an after-party in 2018, where she and the Indian cricketer in question hit it off instantly. Buzz was that the actress had been messaging Pandya in order to arrange two free passes of the World Cup matches in London for her and her mother. But Urvashi had rubbished all the reports stating that her former manager was just trying to malign her image, and such incidents never took place.

ON THE WORK FRONT

As for Hardik Pandya was a valuable addition to the Indian side during World Cup 2019. The all-rounder scored 226 runs at the strike rate of 112.43 and took 10 wickets with an economy of 5.65. Pandya came through as the fifth bowler for his skipper and had an upward growth curve.