Urvashi Rautela's mother, Meera Rautela gave a befitting reply to a troll who called her "Saasu Maa" and asked her whether she has plans of becoming a "Heroine"

After sharing a cinematic slow-mo video of her daughter Urvashi Rautela on her Instagram handle, mom Meera Rautela recently had fans gushing over a dramatic slo-mo video of herself from the scenic locale of Rishikesh, Uttarakhand. Soon after Meera’s Instagram Reel surfaced on social media, a user slid into the comment section of her post and called her "Saasu Maa" by trolling her for having plans of becoming a 'Heroine' in films. Read on to find out how Reema Rautela responded to the troll.

Urvashi Rautela's mother, Meera Rautela is quite active on social media and doesn't leave any opportunities to keep her followers updated with her whereabouts on Instagram. Meera is currently enjoying her staycation in Rishikesh and her Instagram handle is proof. She recently took to Instagram to share a video clip of herself from a picturesque location in the city and left netizens gushing "Beautiful" over the same.

In the video shared by her, the beloved mother of the Pagalpanti actor could be seen talking a stroll on an empty street surrounded by lush greenery as she walked in slow motion towards the camera. She sported an all-white ensemble in her IG reel, comprising a white kurta over white palazzo, a matching sheer dupatta with a pair of white stilettos. Meera rounded off her look with classic black shades and her hair let open.

Soon after her video clip surfaced on the internet, while other users were all praises about it, a user took to the comment section of her post and referred to her as his "Saasu Maa". In addition to that, he also went on to troll Urvashi’s mom by asking her whether she’s been harbouring plans of setting foot into Bollywood. The user's comment read: "Good afternoon saasu maa..saasu maa aap bhi films mein heroine banne ki tayari ker rehi hain kya?". Later, Meera also didn't shy away from giving a fitting response to the troll and replied to his comment saying, "Galatfaimi Ke Shikaar Na Ho (Do not fall prey to misconceptions)". 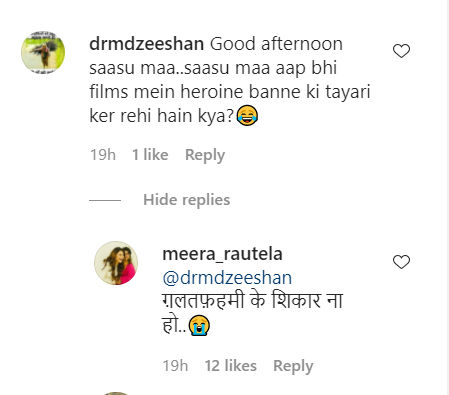