Actor Varun Dhawan, in his latest Instagram post, was seen celebrating April Fool's day in a healthy manner this year. Here's everything that you must know.


Bollywood actor Varun Dhawan is currently busy with the shooting of his upcoming film Bhediya in Arunachal Pradesh. Amidst this, on the occasion of April Fool’s Day, the Coolie No.1 actor this year encouraged his fans to follow a healthy lifestyle. This quirky way of Varun wishing April Fool has been heartily accepted by his fans on social media.

READ | Varun Dhawan and Natasha Dalal go for a boat ride, actor says, 'not on a honeymoon'

On Thursday morning, Varun took to Instagram to flaunt his chiselled physique with fans. In the pictures shared by him, Varun can be seen rocking in grey sweatpants while displaying his toned abs in a left profile photo. The avid fitness enthusiast seemingly encouraged his followers not to be fooled on this April Fool’s Day and asked them to “eat veggies” for leading a healthy lifestyle. He captioned the photo as, “APRIL fool. Eat your veggies”. Check out the photo shared by him below:

Upon seeing the post, fans of the actor flooded his comment section by commenting all things nice. Within just an hour, the photo garnered more than 2 lakh likes on the photo-sharing application. While some appreciated his muscular build, on other hand, many showered the post with fire and red heart emoticons. Here’s taking a quick glimpse at how fans are reacting online: 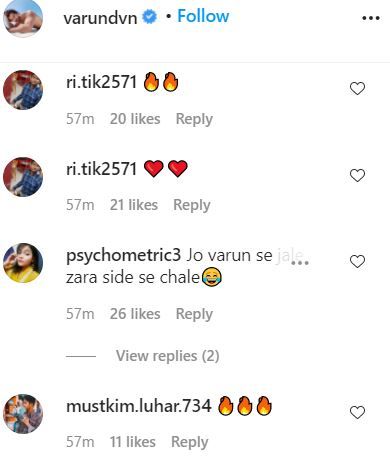 Previously, Varun was seen sharing an adorable video of him playing with a toddler of Arunachal Pradesh, where he is busy filming his next venture Bhediya. The baby’s cuteness couldn’t stop the star from embracing him. “Thiagi kambo is his name” said the actor while sharing the adorable video of the munchkin. Take a look at it here:

Talking about Bhediya, it is the latest addition to Varun Dhawan’s upcoming films and for the first time ever, he will play the part of a werewolf in a movie. The plot of the film is based on an Indian urban legend of a werewolf being disguised as human and living in the community. However, on every full moon night, they must transition themselves in their creature form. Apart from him, Kriti Sanon and Abhishek Banerjee essay pivotal roles in the film. The announcement of the film was done by Varun on his Instagram page. Check it out here: