Bollywood actor Varun Dhawan took Instagram to show off his chiselled and well-trained body with the help of reels, with the song Peaches, by Justin Bieber.


Varun Dhawan is a fitness freak and his Instagram posts showing off his chiselled body proves this. He recently took to Instagram to share a reel. The reel shared by Varun was a BTS of one of his photoshoots. The reel also included the song Peaches, by Justin Bieber. The reel was made by one of Varun Dhawan's fans, and the latter shared the same on his Instagram story.

Varun Dhawan shows off his chiselled body in reel 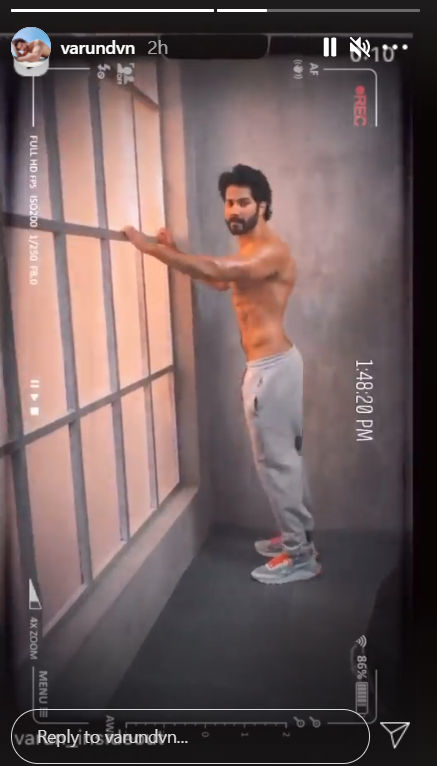 Varun Dhawan was seen posing for pictures by a grey background in a pair of grey sweat pants. He also wore a pair of grey sports shoes and posed for pictures, shirtless. Varun Dhawan shared a few pictures from his shoot, on his official Instagram account. Varun Dhawan's new look is for his upcoming movie Bhediya. The actor is expected to play the role of a werewolf in the film, as shared in the teaser of his upcoming film.

READ | From Varun Dhawan to Abhishek Bachchan, here's what celebs were up to this weekend

Varun Dhawan made his debut in Bollywood with the film Student of the Year. He starred in the film Main Tera Hero as a male lead, along with actors Illeana D'Cruz and Nargis Fakhri, which served as his breakthrough film. His film Main Tera Hero completed 7 years recently and Varun shared a long post on Instagram, expressing how he felt during the release of the film and how grateful he was, to be a part of such a huge project. He also shared a bunch of pictures from the film, along with the long heartfelt post on social media.

On the work front, Varun Dhawan will be seen in Jug Jugg Jeeyo and Bhediya. Varun Dhawan’s upcoming film Bhediya is a comedy-horror film directed by Amar Kaushik. Bhediya cast also includes Kriti Sanon, Deepak Dobriyal and Abhishek Banerjee. The film is the third instalment of Vijan's horror universe, the first being Stree, starring Rajkummar Rao and Shraddha Kapoor and the second being Roohi starring Janhvi Kapoor and Rajkummar Rao. Bhediya is expected to release in theatres on April 14, next year.