Vicky Appreciates 'Atrangi Re' Team In New Post; Urges Director To Cast Him In Next Film 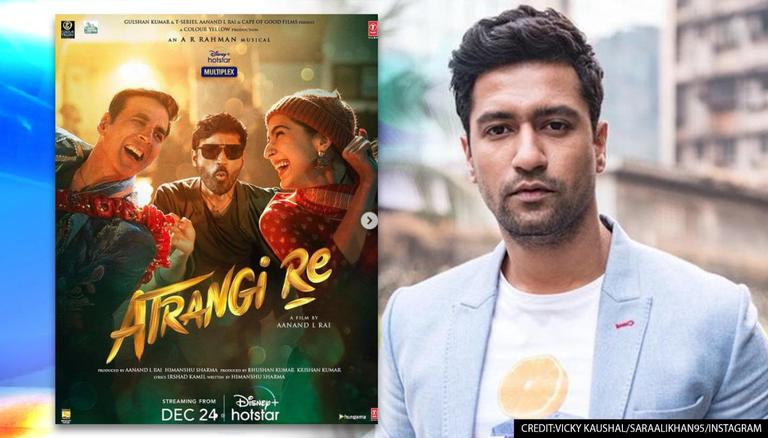 
As the movie, Atrangi Re has garnered tons of love and appreciation from the audience and critics, it was recently marked as the most-watched film on the streaming platform, Disney+ Hotstar. Recently, actor Vicky Kaushal also took to his verified Instagram handle and reviewed the film. Kaushal penned an appreciation post for Atrangi Re team. 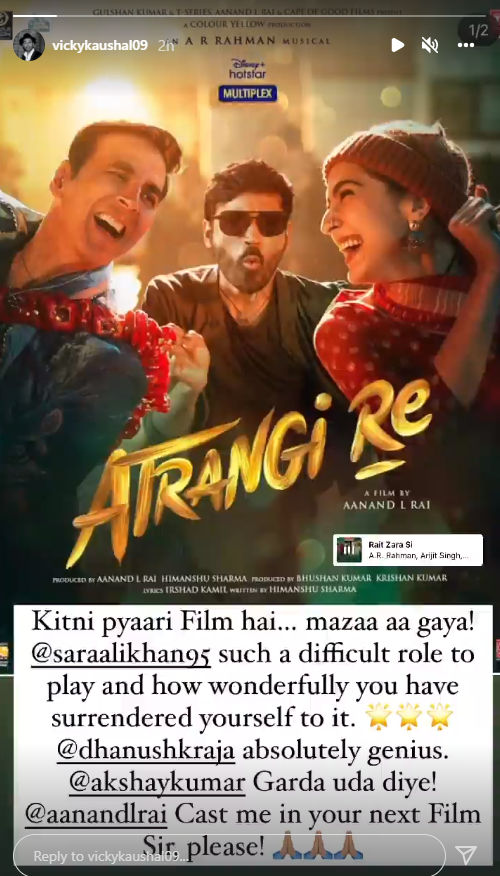 Taking to the photo-sharing site, Vicky Kaushal dropped Atrangi Re's poster and penned a sweet note. He wrote, "Kitni pyaari Film hai... mazaa aa gaya! @saraalikhan95 such a difficult role to play and how wonderfully you have surrendered yourself to it. @dhanushkraja absolutely genius. @akshaykumar Garda uda diye! @aanandlrai Cast me in your next Film Sir please!"

Directed by Aanand L Rai, movie stars Sara Ali Khan, Dhanush and Akshay in the lead with other talented actors namely Seema Biswas, Ashish Verma, Dimple Hayathi, Pankaj Jha and others. According to a media statement, the director mentioned it was 'humbling and gratifying' that the film did so well.

He said, "Atrangi Re is a labour of our love and when something you have worked so hard for, sparks such strong emotion in your audience, it feels like a complete win because the audience’s verdict is the final verdict. We are grateful that the film has received so much love and that the performances, music and plot are being widely appreciated. It’s very humbling and gratifying."

Sara Ali Khan's character Rinku is a strong and independent young woman in the film. She disregards the opinions of others and follows her heart, which leads her to fall in love with a magician, played by Akshay Kumar, named Sajjad. Rinku is an orphan from Bihar whose parents died when she was a youngster, and she is cared for by her grandmother and extended family. Her family becomes intolerant of her behaviour and decides to marry her to someone from outside the city because she frequently leaves her house to spend time with Sajjad.

This is when the family meets Dhanush's character, Vishu, a medical student from southern India who is about to marry Mandy in two days. Rinku's family, on the other hand, forcibly marries the two. They decide to travel to Delhi as a freshly married pair and then split up when they arrive because they both have other love interests. The plot revolves around what occurs once they get to Delhi, where Rinku is torn between two men she loves.