Actor Vidya Balan, who impressed fans with her stellar performance in the last film titled 'Sherni', has begun shooting for her next untitled film. 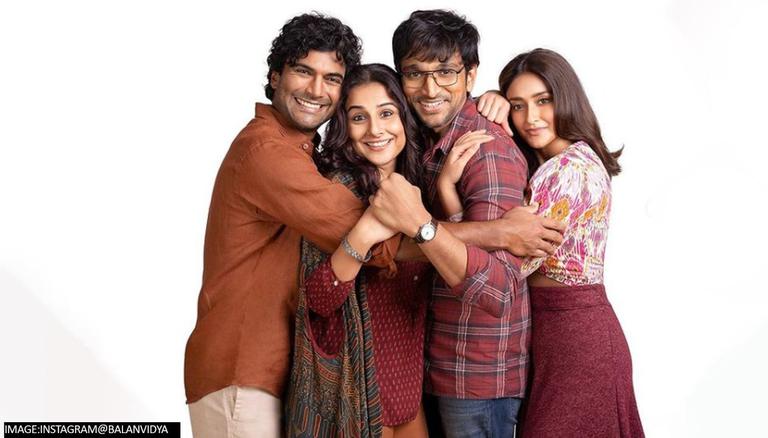 
Actor Vidya Balan, who impressed fans with her stellar performance in the last film titled Sherni, has begun shooting for her next untitled. After his spectacular performance in Scam 1992, actor Pratik Gandhi is all set to join the cast along with Ileana D'Cruz and Sendhil Ramamurthy. The film which is being helmed by Shirsha Guha Thakurta is touted to be a drama-comedy about modern relationships.

The Dirty Picture actor took to Instagram and shared a picture with the entire cast and revealed that she will be seen playing the role of Kavya in the next. She also explained that the film will ‘make you laugh and cry in equal measure and I’m enjoying playing Kavya to the hilt.’

“Stoked about my next – an untitled charming drama-comedy about modern relationships, which promises to be either your story or the story of your friend. It will make you laugh and cry in equal measure and I’m enjoying playing Kavya to the hilt. Delighted to be directed by @shirshagt and to have such an amazing posse of co-actors - @pratikgandhiofficial  @ileana_official  and  @sendhil_rama. It’s my first with @applausesocial (@sameern ) and my next with my Tumhari Sulu producers  @ellipsisentertainment (@tanuj.garg, @atulkasbekar, @swatisiyer .)Can’t wait for you’ll to watch it next year! And wait for an announcement on the title soon[sic],” she wrote.

The title of the film will be announced soon. The untitled film is touted to be a progressive, uninhibited take on modern relationships. It marks Applause’s foray into the big screen experience. It is their second collaboration with Ellipsis. Director Shirsha Guha told Bollywood Hungama that when he first heard this story, he was instantly attracted to its universe — honest, funny and so today. The star cast in the film has been his dream to work with. According to him, their generosity is something he will always cherish. The director said that the producers (Applause and Ellipsis) have been extremely supportive and stood by him like a rock. At last, he added that he is nervous, but this journey so far has been truly special for him.

WE RECOMMEND
From Lara Dutta to Kishori Shahane, here are the actors who played Indira Gandhi on screen
World Cities Day: Bollywood movies that pay tribute to major Indian cities
Pratik Gandhi opens up about short film 'Shimmy', says 'story touched me deeply'
Pratik Gandhi reveals how installing phone towers shaped him as an actor; Read on
Pratik Gandhi shares his opinion on being compared to Abhishek Bachchan in The Big Bull
Listen to the latest songs, only on JioSaavn.com