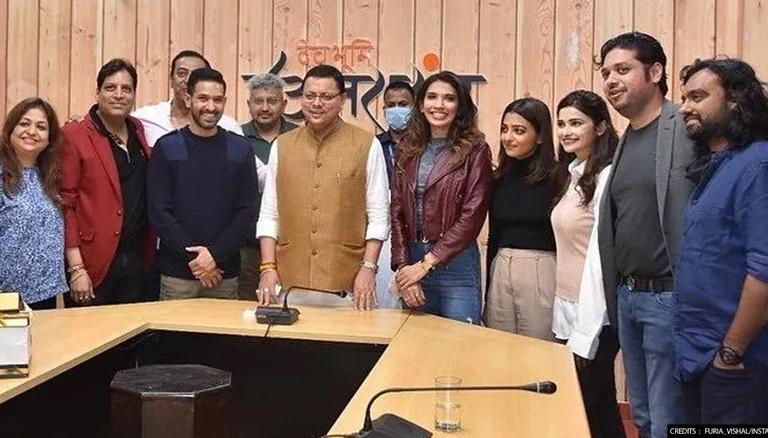 
It’s been almost a month since versatile actors Vikrant Massey and Radhika Apte are shooting for their next movie, Forensic, in Mussorie. Known for its beauty and mystic vibes, the two actors seem to have developed their fondness for the particular place. Apart from shooting for the series, the entire team recently met Uttarakhand Chief Minister Pushkar Singh Dhami.

The shooting of the gripping drama series Forensic went on floors in August. Few weeks after commencing the shoot, the team, including the leading duo Vikrant, Radhika, and actors Prachi Desai and Vindu Dara Singh along with the producers Deepak Mukut, Mansi Bagla, and Varun Bagla among others from the crew met the Uttarakhand CM.

Producer Deepak Mukut believes the fact that this film could pave way for other shootings to take place in the beautiful mountains. Sharing his delightful experience of meeting the CM, Mukut told ANI, "It was an insightful meeting and a privilege for us. The kind of on-ground support rendered by the local authorities is only going to invite more producers to shoot their films here. In post COVID times, the safety of the crew is of utmost importance and Uttarakhand has been a safe haven in that sense."

On the other hand, Director Vishal Furia took to Instagram and shared a picture of the entire team posing with the CM and also shared that shooting in Mussoorie was his dream. "With locals stepping in to support at every step along the way, we have had a smooth sailing shoot without any glitches. Even when we shoot in market areas, the civic authorities ensure we are not disrupted and often volunteer for crowd management. As the CM Pushkar Ji, sets the tone and we were thankful that he and his people have been such warm and gracious hosts", he told ANI.

Apart from sharing his thoughts, he captioned the picture, and wrote, “Meeting Hon. Uttarakhand CM Pushkar Singh Dhami in Dehradun. @pushkardhami_official. Invited by the Hon. Uttarakhand CM Pushkar Singh Dhami in Dehradun. Such a humble and nice person who welcomed our entire Forensic team with love and support. @pushkardhami_official”. The forthcoming drama is directed by Vishal Furia and bankrolled by Deepak Mukut, Mansi Bagla, and Varun Bagla under their banners of Soham Rockstar Entertainment Private Limited and Mini Films. Hunar Mukut is serving as the co-producer.