Actor Vikrant Massey on Sunday said that he has tested positive for COVID-19 and is under self-quarantine. Massey, 33, took to Instagram and asked those who came in contact with him to also get tested for the virus.

The Mirzapur star wrote that he contracted the virus despite following necessary precautions while shooting. While he had begun filming for Red Chillies Entertainment's thriller Love Hostel last month, it's unclear which project the actor was currently working on.

"Despite necessary precautions on shoot, I have tested COVID positive. In self-quarantine. Requesting all those who've come in close contact with me in the last few days, to get yourself tested, ASAP. I'm taking the prescribed medications and adequate rest and currently doing fine. Urging everyone to do the basics right and step out of your homes, only if necessary," Massey added.

On Saturday, Mumbai reported 6,130 new COVID-19 cases, taking its caseload to 3,91,791. This was the highest single-day rise in the city since the pandemic began. 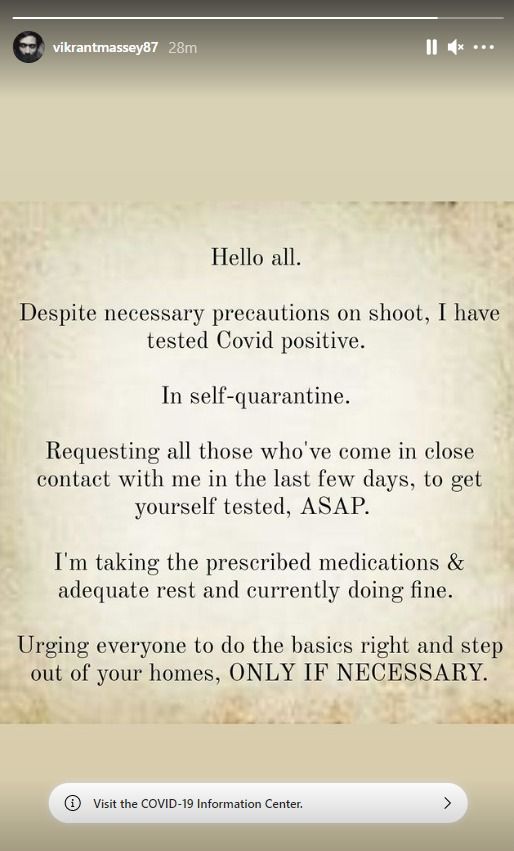 Vikrant Massey made his debut in 2004 on television with Kahaan Hoo Main. He has appeared in various television shows before entering Bollywood with Lootera. He also appeared as a supporting cast in Dil Dhadkne Do and Half Girlfriend. He is famously known for his role in Mirzapur where he played the role of Bablu Pandit.

Vikrant Massey's other films that are widely popular include Devanshu Singh’s 14 Phere. The movie will also feature Kriti Kharbanda and will be produced by Zee Studios.