From a recent video that has surfaced on the internet, one needs to take fitness inspiration from Amitabh Bachchan's granddaughter Navya Naveli Nanda.

From a recent video that has surfaced on the internet, one needs to take fitness inspiration from Amitabh Bachchan's granddaughter Navya Naveli Nanda. She was recently spotted working out at the sidewalk of a busy street in New York. In the video, the 21-year-old can be seen dressed in neon green-grey gym wear and completely focussed on the task at hand.

However, one the picture was posted, netizens just had one key question to ask and that was to know why she was working out at a sidewalk. Read some reactions below: 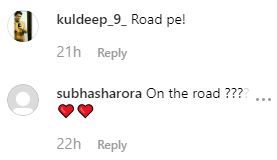 Recently, Navya and her brother Agastya took the internet by storm after pictures from the latter's graduation surfaced on the internet. It was posted by Shweta Bachchan Nanda from England, where the 18-year-old can be seen striking a pose with his sister at Sevenoaks School in Kent, London. While Navya can be seen wearing a pink blazer, with white shorts and t-shirt, Agastya completed his look with a classic navy blue blazer.

Although Navya is not keen on joining Bollywood, she did make headlines recently after reports suggested that she is seeing Javed Jaaferi’s son Meezaan. Although the 21-year-old chose to stay mum about the subject, the former rubbished the rumours stating that the two just belong to the same friend circle.