WATCH: Sara Ali Khan And Kartik Aaryan's Off-screen Chemistry Wins Hearts As The Pair Bonds On The Sets Of Imtiaz Ali's Next

After releasing their first look from the yet untitled romantic drama, Kartik Aaryan and Sara Ali Khan were seen celebrating on the sets of the film in Delhi.

No one would’ve imagined that Kartik Aaryan and Sara Ali Khan would be doing a film so soon after expressing fondness for each other recently. Imtiaz Ali lapped up the opportunity to cast the duo amid their comments for each other making headlines ever since the 'Kedarnath' actress said she wants to date the ‘Pyaar Ka Punchnama’ star. The shooting of the film, which is speculated to be a sequel of 2009 romantic drama ‘Love Aaj Kal’, was going on in full swing in Delhi as the pictures and videos from the sets have surfaced on social media. Now, after releasing their first look from the yet untitled romantic drama, the pair reportedly wrapped up shooting for the first schedule of the film in the national capital.

For the uninitiated, Sara admitting that he wants to date Kartik on a previous episode of ‘Koffee with Karan’ had started it all. Later, the ‘Simmba’ star said she found him ‘cute’ and even jokingly asked an RJ to send him her address. Kartik had responded to it by quipping that he’s still waiting for her address. Later, they met at an event and exchanged pleasantries as her ‘Simmba’ co-star Ranveer turned ‘matchmaker’ to introduce them.

On Monday, March 25, Sara shared a video on Instagram where she and Kartik can be seen celebrating their respective achievements in the recent award ceremonies. The pair can be seen having a gala time together and their fun-filled chemistry has won the hearts of the netizens. In the post, Sara revealed that she has wrapped up shooting for the first schedule of the much-anticipated venture and captioned it saying, "And that’s a schedule wrap for me in Delhi 🎥 📷🎞😱👀🤩😫🤭👏🏻🙌🏻🤷‍♀️🍾🎂🧁🎊⏯🔙🔜‼️" 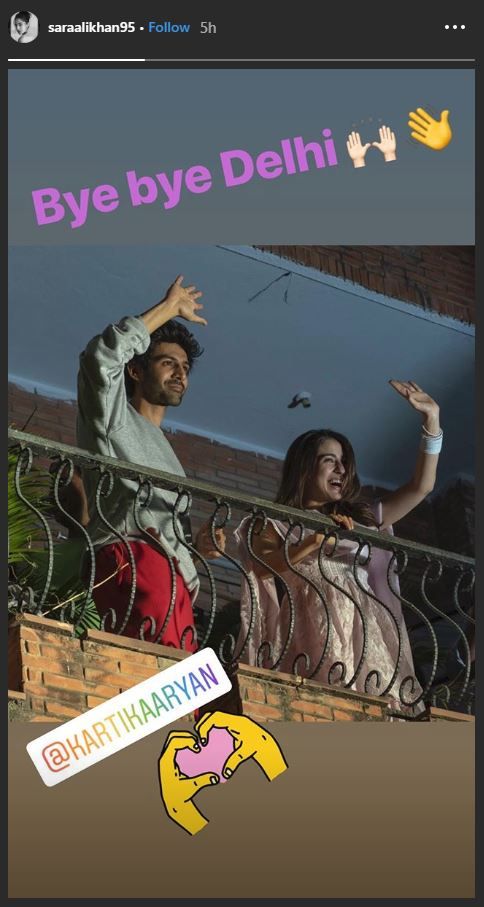 Meanwhile, Kartik also shared a number of pictures from the bash and he thanked director Imtiaz Ali for organizing the surprise celebration for them. Admiring this thoughtful gesture, he wrote, "Celebrating Sara’s #FilmfareAward And my win at d #ZeeCineAwards 🏆 Thank you @imtiazaliofficial Sir and @wearewsf for making our win more special by this surprise celebration ❤️ Such a sweet n thoughtful gesture 🤗 @saraalikhan95 @filmfare @zeecineawards🙏🏻" 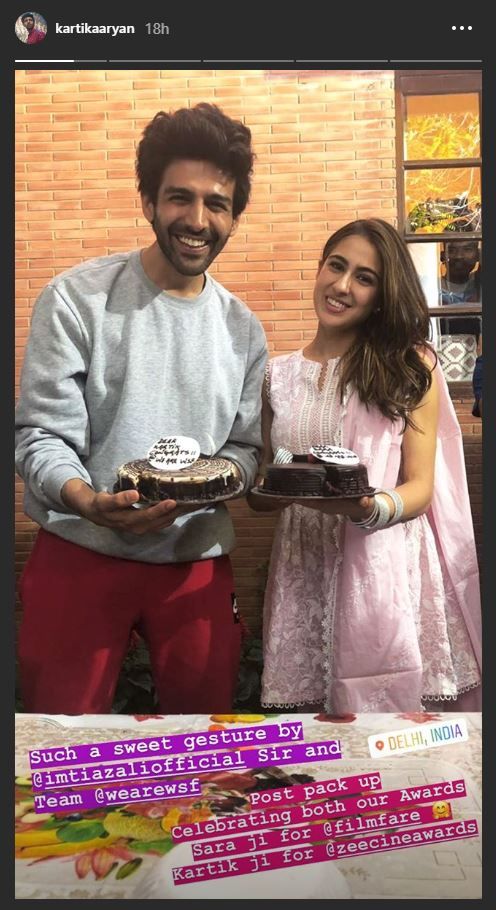 While fans can't stop anticipating about the pair's on-screen chemistry, Makers on Wednesday, March 20, unveiled their first looks from the film. Kartik and Sara looked absolutely 'in-love' in the first official picture. The sunkissed pair can be seen cuddling, with Sara resting her head in Karthik's shoulders. The Makers further announced that the 'yet to be titled' venture also stars Randeep Hooda and is all set to hit the theatres on February 14, 2020. The project is backed by Jio Studios, Dinesh Vijan's Maddock Films, Imtiaz Ali and Reliance Entertainment’s Window Seat Films.