The trailer of Amol Parashar's upcoming film, 'Cash' released on YouTube on November 8 and gave fans a glimpse into what to expect from the film. 
The trailer of Amol Parashar's upcoming film Cash released on YouTube on November 8 and gave the fans a glimpse into what to expect from the film. The film will see the actor take on the lead role alongside Kavin Dave, Gulshan Grover and Swanand Kirkire. The film will be all about a group that comes together to launder black money after the government announced demonetisation. The movie will get a digital release on Disney+ Hotstar on November 19.

The Cash trailer packs a punch and lets fans in on what to expect from the upcoming film. Cash will see Amol Parashar playing the role of Armaan, a youngster with the dream of becoming India's Elon Musk. He looks for opportunities to ideate about his very own start-up business and has a few up his sleeve. When he hears about the news of demonetisation, he takes his chance and looks at it as a business opportunity.

The Cash trailer sees Armaan take on the challenge of laundering 5 crores of black money within a span of 52 days before the bank stops accepting old notes. However, Armaan finds himself in trouble when politicians and other higher-ups enter the picture. The question remains if Armaan will succeed in laundering the black money successfully.

Taking to his Instagram account, Parashar was ecstatic after the release of the trailer of Cash. He also announced that the film was trending on Twitter and shared a screenshot of the same with his fans and followers on the social media platform. He thanked his fans and well-wishers for the honour after #CashFilmOnHotstar trended on the micro-blogging platform. 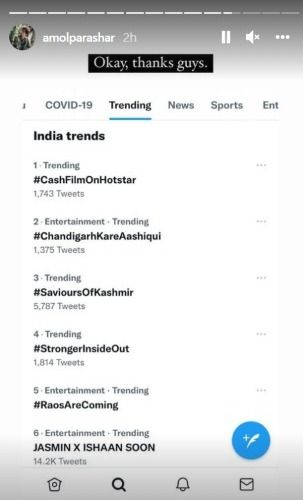 Amol Parashar was last seen in Vicky Kaushal starrer Sardar Udham and took on the role of Shaheed Bhagat Singh. Kaushal revealed the first look for the actor on his social media account ahead of the release of the film. He uploaded a picture of the duo smiling and shared a still from the film.

The picture gives a feeling that the duo was enjoying a candid moment. Kaushal captioned the image, "My guru, my friend, my brother… Mera Bhagatya! Presenting @amolparashar as Shaheed Bhagat Singh. Glad we played this friendship Amol."