Vicky Kaushal and Harleen Sethi's breakup rumours recently have been the talk of the town. From 'it's a serious' relationship to 'Single, Ekdum', Vicky's statement created a stir on social media. While Harleen has 'unfollowed' the actor, Vicky still follows her on Instagram. The two never officially confirmed to the media but they did drop hints once in a while.

Amidst all this, Harleen Sethi, who appears in ALTBalaji's 'Broken but beautiful' series, teamed up with  choreographer Melvin Louis to perform on 'Kalank's' 'First Class' song. And who joined their routine? It was none other than Varun Dhawan.

And Melvin wrote: "Thank you @varundvn 🔥🙌🏻 for turning this video into a first class video with your super-duper entry 🔥 To all watching shower your love to Varun for doing this ! And Yes ! Watch the full version on my YouTube channel now 📍To all those who will be praises for @itsharleensethi I love you all 😁😁🙌🏻 Kudos to @zeemusiccompany @dharmamovies@foxstarhindi !  Moves got smoother with @skechersindia ." [sic]

Varun Dhawan too shared the video and captioned it as: "A #firstclass dance with @melvinlouis and @itsharleensethi who are incredible"

Netizens have showered their love and praised the video that has garnered over 200,000 views on social media. Read the reactions below - 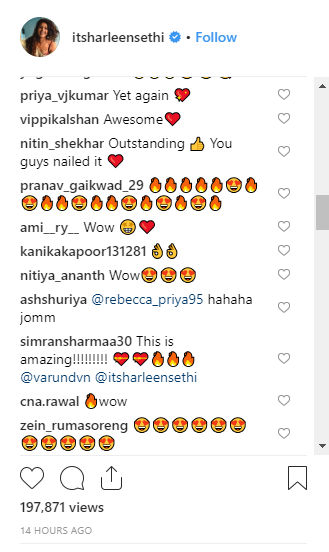 Coming back to the film 'Kalank', the makers of 'Kalank' launched the second track 'First Class' on March 22. The song features Varun Dhawan and Kiara Advani. Sung by Arijit Singh and Neeti Mohan, the song is composed by Pritam.

The USP of the song is yet again the grandeur of it and Varun Dhawan's 'high-on-energy' dance moves which are choreographed by his 'Street Dancer' director Remo D'Souza. Wearing a white pathani, Varun looks spectacular and Kiara in her traditional attire totally compliments the actor and matches up to him.

The period drama set in the 1940s will be helmed by '2 States' director Abhishek Verman and will be jointly produced by Karan Johar, Sajid Nadiadwala, and Fox Star Studios. It is all set to hit the theatres on April 19, 2019.