What To Watch In October? Hindi Film Releases To Watch Out For Across OTT Platforms 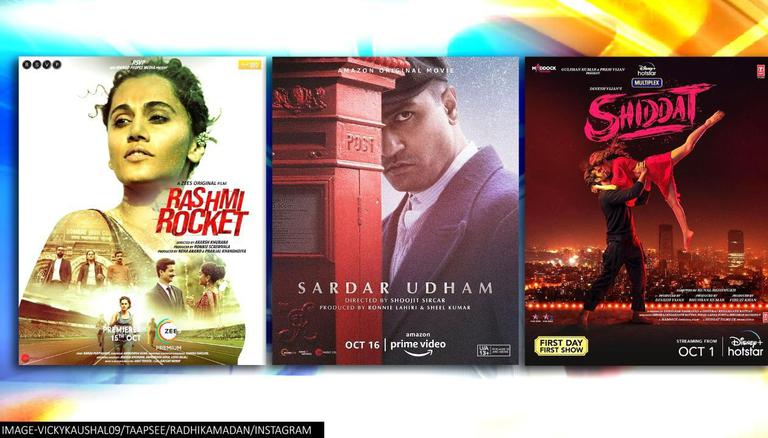 
The boom of OTT platforms over the years is now doubling with several films taking the digital route to reach a wide audience across the globe. With the month of October approaching, several latest Hindi films have booked their dates to release their ventures across multiple OTT platforms. Promising a month full of melodrama with a medley of action, here is a list of movies releasing in October.

What to watch in October?

Starring Radhika Madan and Sunny Kaushal in the lead roles, the romantic drama will also feature Mohit Raina and Diana Penty playing pivotal roles. The poster of the movie intensified the audience's anticipation as it portrayed the duo's magical chemistry. The Maddock Original Film is directed by Kunal Deshmukh. Bankrolled by Dinesh Vijan and Bhushan Kumar, the film will release on October 1 on Disney Plus Hotstar.

Helmed by Akarsh Khurana, the sports drama will feature actor Taapsee Pannu in the lead role. Recently, the actor added to the fans' excitement by taking to her Instagram to dedicate her movie to all the female athletes of the country. Along with Taapsee Pannu and Abhishek Banerjee, the movie will also star Priyanshu Painyuli, Shweta Tripathi in lead roles. The movie is set to release on October 15 on the Zee5 streaming platform.

The biographical film features Vicky Kaushal in the lead role. Directed by Shoojit Sircar, the film revolving around the life of revolutionary freedom fighter Udham Singh is bankrolled by Rising Sun Films in collaboration with Kino Works. Sardar Udham will be made available across the globe on Amazon Prime Video on October 16.

Kanishk Varma's action flick starring Vidyut Jammwal is all set to hit the OTT platforms this month. The exciting poster of the movie shows the actor wielding a gun in one hand and holding a baby in the other. Sporting a combat suit, the audience is excited to witness high octane action from Jammwal. The actioner also features Rukmini Maitra, Chandan Roy Sanyal and Neha Dhupia in significant roles. The movie is set to release on October 15 on Disney Plus Hotstar.

WE RECOMMEND
What's new on Netflix in October? Find out which movies and shows are coming
Listen to the latest songs, only on JioSaavn.com