Surekha Sikri had received a standing ovation from the stars while accepting her 3rd National Award from Vice President Venkaiah Naidu in 2019. 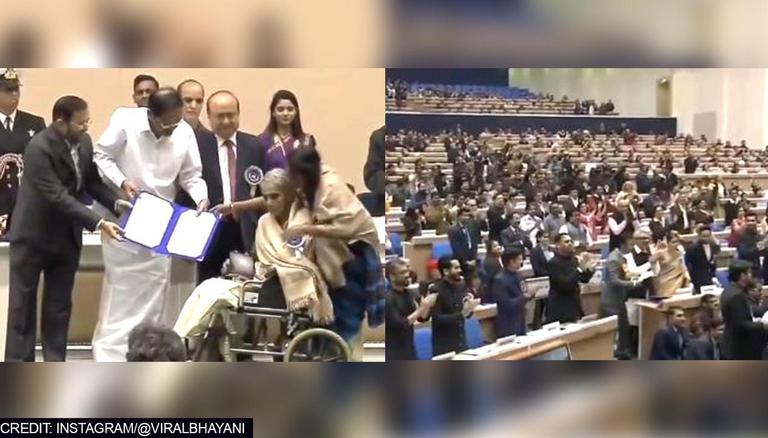 
Considered among the acclaimed actors of the film industry, Surekha Sikri breathed her last on Friday. Tributes poured in for the Badhaai Ho star with numerous celebrities expressing their grief on her death due to a cardiac arrest. A glimpse of the respect for her was evident in the manner in which was felicitated with her third National Award in 2019.

Surekha Sikri suffered a brain stroke in 2018, that left her hospitalised and even struggling for funds. She was then declared the Best Supporting Actress at the 66th National Awards presented in December 2019.

The veteran was brought to the stage in a wheelchair for her award. As Vice President Venkaiah Naidu presented her with the award, the top names of the film industry could be seen standing and clapping for her. The guests included Best Actor award recipients Ayushmann Khurrana-Vicky Kaushal, Keerthy Suresh and Akshay Kumar, who starred in Best Film on Social Issues, Pad Man.

READ | Chiranjeevi and his wife Surekha cast their votes in the Hyderabad elections; Read more

Unfortunately, Sikri suffered another brain stroke the next year. In the statement from her manager about her death, the health complications due to the second brain stroke were mentioned.

READ | Surekha Sikri's quiz: Do you know the debut project of the 'Badhaai Ho' actor?

“Three-time national award winning actress, Surekha Sikri has passed away following a cardiac arrest earlier this morning at the age of 75. She had been suffering from complications arising from a second brain stroke. She was surrounded by family and her caregivers," read a statement from her manager.

"The family asks for privacy at this time. Om Sai Ram🙏,” it added.

Sikri’s other two National Awards were for the movies Tamas and Mammo. Among her most popular roles was as Dadisa in the TV serial Balika Vadhu, apart from her appearances in Sarfarosh, Zubeidaa, Mr. and Mrs. Iyer, Raincoat, and others.

She was last seen in the movie Ghost Stories.

WE RECOMMEND
Actor Surekha Sikri, known for 'Badhaai Ho', 'Balika Vadhu' & others, passes away at 75
Surekha Sikri discharged from hospital after recovering from brain stroke; Read details
Surekha Sikri's quiz: Do you know the debut project of the 'Badhaai Ho' actor?
Surekha Sikri refuses financial aid, says 'want to earn respectfully with the work I get'
Surekha Sikri is doing fine, is in able hands, confirms actor Sonu Sood