As time passes quickly, it has been a month since actress Yami Gautam got hitched with director Aditya Dhar in an intimate ceremony in Himachal Pradesh. 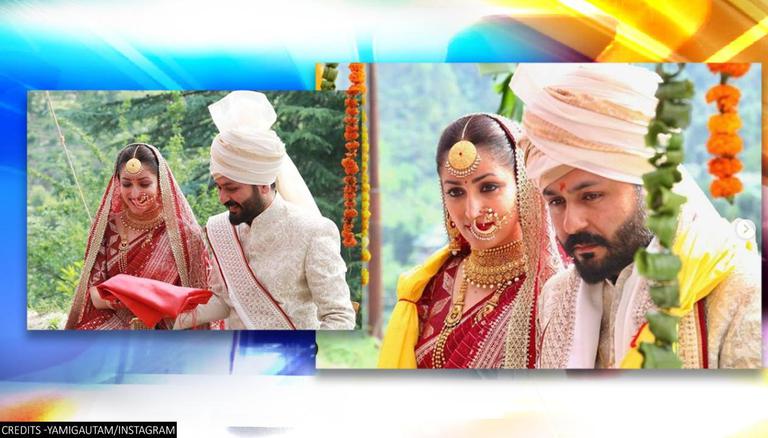 
As time passes quickly, it has been a month since actress Yami Gautam got hitched with director Aditya Dhar in an intimate ceremony in Himachal Pradesh. The actress who had announced the news with a picture from her wedding recently took to Instagram and described how the last month has been for her with an unseen picture.

The picture showed Yami and her Uri: The Surgical Strike director performing one of the rituals at their wedding. While captioning the post, she wrote, “To a month filled with love and gratitude.” Sharing the same picture, Aditya expressed his disbelief that it’s already been a month since the couple’s special day. Yami Gautam and Aditya Dhar got married last month. The actress looked endearing in a crimson silk saree with gold work on it and a matching dupatta on her head. Her jewellery included a choker, maang tika, and a pahadi nath to pay homage to her Himachal Pradesh roots. The two stars got married at her farmhouse in Mandi, Himachal Pradesh, on June 4. The wedding was a low-key affair, with only their ‘immediate family’ in attendance. 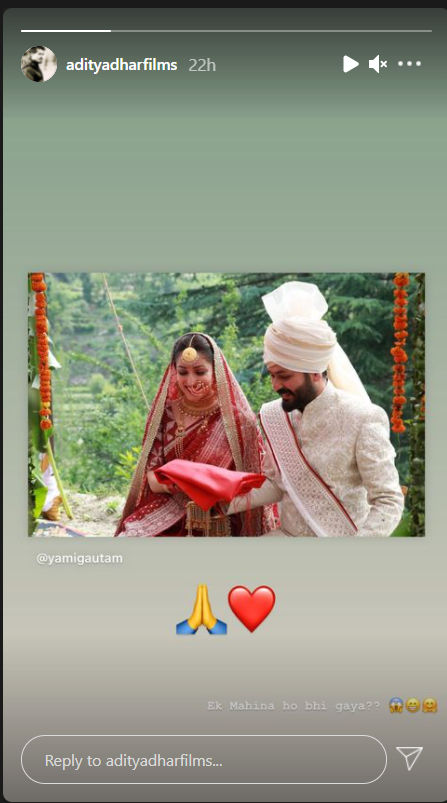 On June 4, Yami and Aditya broke the news of their wedding with identical posts on Instagram. Sharing pictures of themselves while taking their marriage woes, the actress wrote, “With the blessings of our family, we have tied the knot in an intimate wedding ceremony today. Being very private people, we celebrated this joyous occasion with our immediate family. As we embark on the journey of love and friendship, we seek all your blessings and good wishes.” After surprising fans with their wedding news, the couple made their first public appearance after they reached Mumbai together to resume their work commitments.

Meanwhile, on the professional front, Aditya is working on The Immortal Ashwatthama, which features the couple’s Uri: The Surgical Strike team member Vicky Kaushal reportedly as a mythological superhero. Yami will next feature in Bhoot Police, co-starring Saif Ali Khan, Jacqueline Fernandez, and Arjun Kapoor. She has also started the shooting for the movie Dasvi alongside Abhishek Bachchan and Nimrat Kaur.

READ | DYK Avika Gor from 'Balika Vadhu' has worked with Yami Gautam in a TV show back in 2007?
READ | Yami Gautam summoned by Enforcement Directorate for statement next week; here's why

WE RECOMMEND
Yami Gautam shares who her 'one-man army' was during her wedding and her preparations
Yami Gautam's bridal glow in her Kaleera ceremony is hard to miss; Kajal Aggarwal reacts
When Yami Gautam broke silence on fairness cream controversy: 'Had become very emotional'
DYK Avika Gor from 'Balika Vadhu' has worked with Yami Gautam in a TV show back in 2007?
Yami Gautam summoned by Enforcement Directorate for statement next week; here's why