Zareen Khan and Karanvir Bohra took to their Instagram to share the news of their new collaboration by posting a couple of entertaining reels. Read more.

Karanvir Bohra and Zareen Khan took to Intagram to announce the news of their new project together in the most entertaining way. The Veer actress and the Naagin actor posted several videos on their Instagram showing off their chemistry to their fans. Watch the videos posted on the actors' Instagram.

The 38-year-old actor shared a video in which he can be seen romancing with Zareen Khan on a Bollywood song. In the caption, Karanvir revealed his new collaboration with Zareen writing 'Swarglok ho yaa pataal lok, yeh jodi bhulok me lock ho chuki hai' indicating their on-screen relationship in their project. Karanvir put the hashtags #newfilm and #newbeginnings while tagging Zareen Khan and wished that the audience will enjoy their chemistry on screen.

The 33-year-old actress took to Instagram to share the news of her new movie with Karanvir Bohra with her fans. She posted a picture of her with her new team including Karanvir Bohra with producer Pancham Singh and Ankit Pandey. She thanked filmmaker Sunil Bohra for making the collaboration possible. Expressing her feeling about the new project in the caption, Zareen wrote that she can not wait for the 'crazy ride' with her team.

Fans react to the announcement. 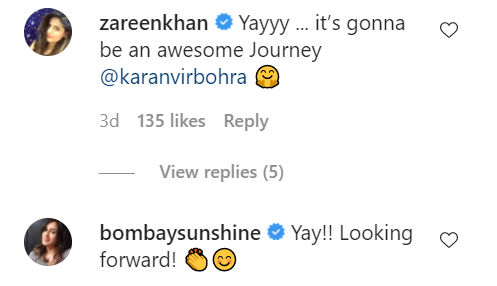 To make the announcement of their new project more interesting, the actors made funny Instagram reels together that showed off their chemistry. In one Instagram reel, Karanvir can be seen stealing away Zareen Khan from his friend as he captioned the reel 'sooch samajh ke help Lena'. Zareen Khan also uploaded a reel on Instagram when she asked her fans what they think about her new 'jodi' with Karanvir Bohra.