'12 Angry Men' Cast: Details About The Actors Of The 1957 Courtroom Drama Film 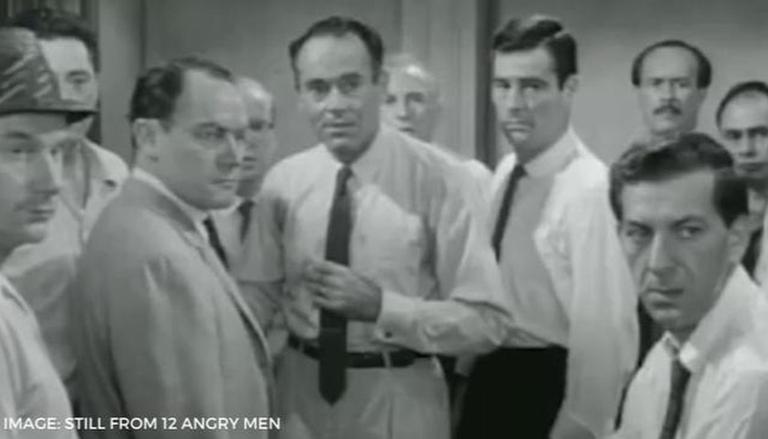 
12 Angry Men is a 1957 courtroom drama film directed by Sidney Lumet and is adapted from a 1954 teleplay of the same name. 12 Angry Men cast includes Henry Fonda, Martin Balsam, John Fiedler, Lee J. Cobb, E. G. Marshall, Jack Klugman and others. Read ahead to know more about the cast of 12 Angry Men.

The film tells the story of a jury of men as they deliberate the conviction of an 18-year old defendant. The jurymen are identified only by numbers, no names are revealed. The movie is known for its almost exclusive use of one set. The IMDb rating of the movie is 9.0 out of 10.

A look at 12 Angry Men cast

Martin played the role of a jury foreman who was a calm and methodical assistant and high school football coach in the film. He is best known for films such as Psycho, A Thousand Clowns, The Taking of Pelham One Two Three, Murder on the Orient Express, All the President's Men and more. He died of a stroke in 1996 at the age of 76.

READ | 'The Bad Batch' cast: Details about the cast of the latest Star Wars animated show

Henry played the role of a justice-seeking architect, the only one to votes "not guilty" and openly question the evidence presented. Henry gained prominence with roles in films such as Jezebel, Jesse James, The Grapes of Wrath, The Ox-Bow Incident, My Darling Clementine and more. He died at the age of 77 in 1982.

John played the role of an unpretentious bank worker who gets dominated by others initially. John Fiedler is best known for his films such as A Raisin in the Sun, The Odd Couple and more. He died of cancer in 2005 at the age of 80.

Lee played the character of a hot-tempered owner of a courier business, estranged from his son. He is the most passionate advocate of a guilty verdict. Lee has appeared in films such as The Brothers Karamazov, On the Waterfront and more. He died at the age of 64 due to a heart attack.

READ | 'Skirts Ahoy!' cast: Know all about the actors and their characters in the 1952 film

E. G. Marshall played an analytical stockbroker who is concerned with the facts of the case. Marshall is best known for his television roles in The Defenders and The Bold Ones: The New Doctors. He has appeared in films such as Superman II, and Consenting Adults. He died in 1998 due to lung cancer at the age of 84.

READ | 'Waqt Hamara Hai' cast: All about the actors and their characters in the 1993 film

Jack Klugman portrayed a man who grew up in a violent slum, he is sensitive to insults about his upbringing. Jack is known for television and film work in Cry Terror!, The Defenders, The Twilight Zone and more. He died of prostate cancer in 2012 at the age of 90.