'A Quiet Place 2', 'Aloha' And Other John Krasinski Movies To Binge-watch This Weekend

As you finish watching 'A Quiet Place 2', here is the list of his movies which you may want to binge-watch this weekend. Take a look at the list below. 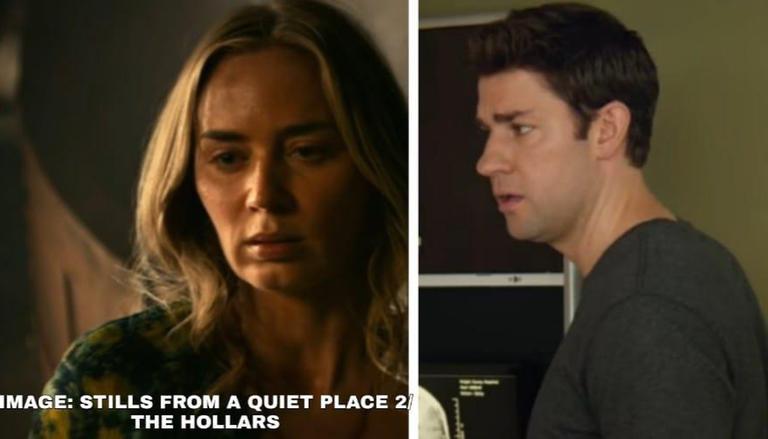 IMAGE: STILLS FROM A QUIET PLACE/ THE HOLLARS


A Quiet Place 2 has released on May 28, 2021. Penned and helmed by John Krasinski, the film marks the sequel to 2018's horror drama, A Quiet Place. The plot of the film focuses on a family that is forced to survive in a post-apocalyptic world by sightless monsters. A Quiet Place 2 review has been shared by the critics as well as the audience positively. As you finish watching John's latest horror drama, here is the list of his movies which you may binge-watch this weekend. Take a look.

2018's John's release is penned by Bryan Woods, Scott Beck, and John himself. It features John, Emily Blunt, Millicent Simmonds, and Noah Jupe. The plot revolves around John and Emily, who struggle to raise their children in a post-apocalyptic world. Bankrolled by Michael Bay, Andrew Form, and Brad Fuller, the film was released in the summer.

Helmed by John and penned by James C Strouse, the film is a comedy-drama released in 2016. It stars John, Sharlto Copley, Charlie Day, Richard Jenkins, Anna Kendrick, and Margo Martindale. Produced by John Krasinski, Ben Nearn, Tom Rice, and Allyson Seeger, the plot of the film revolves around an aspiring New York-based artist, who along with his pregnant girlfriend, returns to his hometown due to his mother's brain surgery.

READ | 'A Quiet Place 2' about broken promises and growing up, says John Krasinski

13 Hours: The Secret Soldiers of Benghazi

2016's action-thriller drama is helmed and bankrolled by Michael Bay. Penned by Chuck Hogan, the film is based on Mitchell Zuckoff's 2014 book with the same title. It features James Badge Dale, John Krasinski, and Max Martini, with supporting roles by Toby Stephens, Dominic Fumusa, Pablo Schreiber, Alexia Barlier, David Denman, and David Costabile. The story depicts the journey of six members of a security team who fight to defend the American diplomatic compound in Libya.

Aloha is a rom-com drama that is penned, helmed, and bankrolled by Cameron Crowe. It features Bradley Cooper, Emma Stone, Rachel McAdams, Bill Murray, John Krasinski, Danny McBride, and Alec Baldwin. The plot revolves around the journey of a former US Air Force officer who returns to Hawaii when he is rehired by a former boss.

IMAGE: STILLS FROM A QUIET PLACE/ THE HOLLARS