Alexandra Daddario To Tie The Knot With Producer Andrew Form, Says 'I Couldn’t Be Luckier'

Percy Jackson fame Alexandra Daddario is set to officially tie the knot with film producer boyfriend Andrew Form as she dedicates a doting post to him. 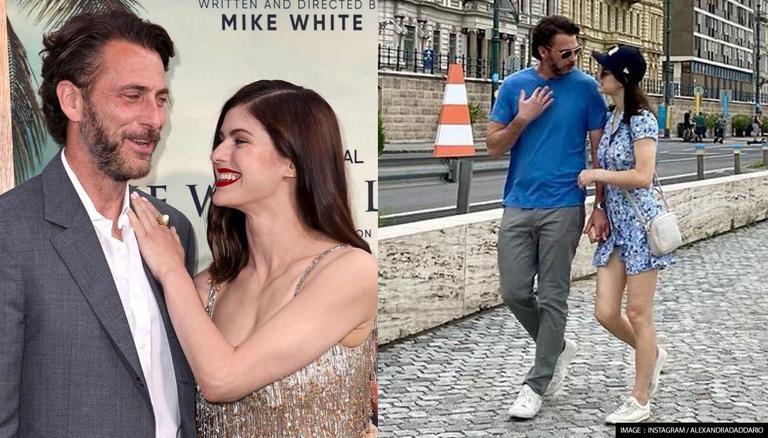 
The White Lotus star Alexandra Daddario recently took to her social media to share a doting post for film producer Andrew Form. The post comes after her engagement with the film producer was confirmed by her representative. The actor debuted her romance with film producer Form, who is known for films like A Quiet Place and Teenage Mutant Ninja Turtles, on Instagram in May this year. Check out her latest post here.

According to a report from E! News, a representative of the San Andreas fame confirmed that the duo is engaged. Subsequently, the 35-year-old actor took to her Instagram to dedicate a post with a doting caption. Describing her 52-year-old fiancé as the 'most wonderful man', she wrote.

''The absolutely most wonderful man, you handle nonsense, loss, life, difficulty, people, with grace and compassion. You’re a loving father, funny, hard-working, honest, introspective, sexy, kind and sensitive- you’ve made room on some of the prime real-estate wall space for pictures of Levon, a dog you never even met.''

The Percy Jackson star continued, ''You’ve allowed the two knuckleheads (who aren’t as good as Levon, shhh) endless space in our home, and I love hearing you from upstairs talking to them when you don’t know anyone is listening.'' Daddario further revealed how Form managed to bring peace in her life by writing, ''You’ve taken the worst moments of my life and soothed them, just knowing that you existed when they happened makes my heart fuller and more pieced together. Right now I am looking at all the giant packages of gluten-free Oreos you surprised me with. It’s so many Oreos, it makes me laugh.''

She further compared her romance with Form to teens in love by writing, ''I love how we have been chastised and separated by flight attendants on multiple international flights because we are like teenagers. Why does it all feel so different?'' Admitting that she is lucky to have him, Daddario concluded, ''This is the love they talk about in poems and Ed Sheeran songs. Andrew- you are the greatest, most formidable love of my life. I couldn’t be luckier.''

The couple does not shy away from flaunting their love online as Alexandra Daddario has shared several pictures with her beau with loving captions. The duo made their red carpet debut in July this year at The White Lotus premiere in Pacific Palisades, California.