Alexandra Daddario's Birthday: Top 5 Looks Of The Actor That Stole Millions Of Hearts

American actor, Alexandra Daddario is not only known for her movies but also for her style statement and extraordinary choices in fashion. 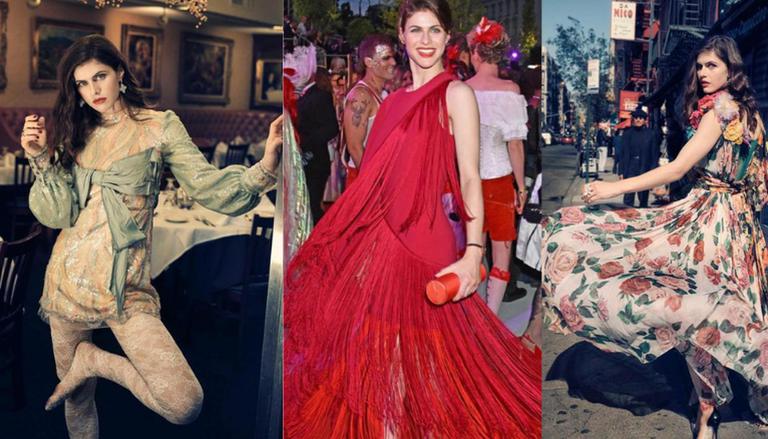 American actress Alexandra Daddario is known for her work in several Hollywood films. She made her acting debut at the age of 16 with ABC's soap opera All My Children by playing the role of Laurie Lewis. The actor had her breakthrough with the role of Annabeth Chase in the film Percy Jackson & The Olympians: The Lightning Thief in 2010. Since then she has starred in several and won millions of hearts. Yet the actor is also known for her style statement and extravagant fashion choices. On the actor's 35th birthday, here are some of Alexandra Daddario's photos in stunning outfits that left millions of jaws dropped.

Floral on the red carpet

Alexandra Daddario walked the red carpet at the world premiere of Solo: A Star Wars Story wearing a full-length floral dress. Designed by Giambattista Valli. Alexandra won hearts in the white gown with a chic belt on the waist. Her hair was done by Michael Long while makeup credits go to Adam Breuchaud.

Alexandra once flaunted a red tassel dress on the red carpet. From footwear to her lip colour, the actor chose to go monochrome and twirled while posing for a picture. Alexandra was styled by Emma Jade Morrison while her makeup was done by Daniel Martin.

Alexandra Daddario's fashion usually has a variety of elements. Once again when the actor was styled by Emma Jade Morrison, she wore a black and white polka dots dress with white heels and a black bag. The dress had suffered sleeves and a knot in front which she paired with minimal makeup.

Alexandra Daddario in a blend of colours

The actor once posed in a short colourful dress by Anahita Moussavian. The shimmery orange and green dress, which had a green knot in front was paired with a lacy pair of stockings. The actor's makeup in the picture was done by Gitabass.

Alesandra posed in another dress by Anahita Moussavian. The colourful floral dress had huge printed roses while some flowers, made out of fabric, covered the sleeves. Ryan Trygstad did Alexandra's hair for the picture.

WE RECOMMEND
Alexandra Daddario's poker-face photos that won the internet
San Andreas cast: A list of the actors and the roles they played
Alexandra Daddario says shooting pandemic thriller 'Songbird' was 'surreal' amid COVID-19
UP memer posts photoshopped picture with Alexandra Daddario, actress replies
As 'The Sandman' cast is unveiled, here's who could be the perfect Death