American actress Amber Heard is on cloud nine at the moment after she shared the news of her newborn through surrogacy and revealed her name. 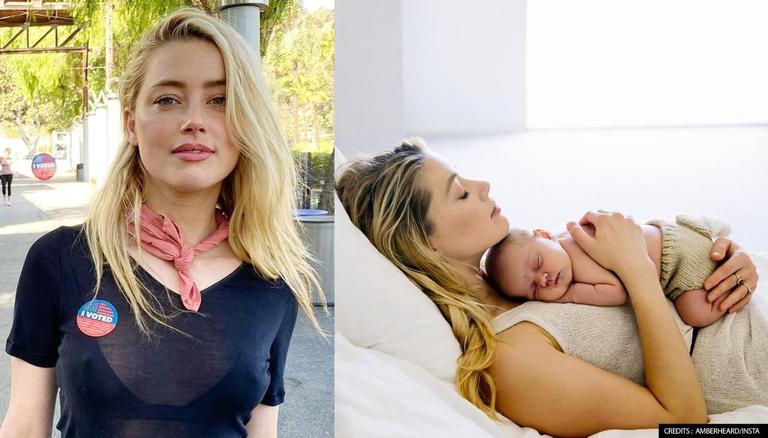 
American actress Amber Heard is on cloud nine at the moment after she shared the news of her newborn through surrogacy. The actress took to Instagram and shared a picture while cradling the little one in her arms and penned a heartfelt note along to express her happiness. In the post, she revealed that she has named the daughter Oonagh Paige Heard and they welcomed her on April 8.

Amber Heard become a mother to a baby girl

In the heart-warming note, the actress wrote how she longed for a child four years back and ‘wanted to do on her own terms and conditions.’ In the emotional note, she wrote, “ I now appreciate how radical it is for us as women to think about one of the most fundamental parts of our destinies in this way. I hope we arrive at a point in which it’s normalized to not want a ring in order to have a crib.” She wrote that “a part of me wants to uphold that my private life is none of anyone’s business,” but added the nature of her job “compels me to take control of this” by revealing the birth. “She’s the beginning of the rest of my life,” Heard said.

Amber Heard has faced a tumultuous period of her life, with her 2015 to 2017 marriage to Johnny Depp involving a spate of legal actions. Depp also is suing the actress for $50 million in Virginia over a Washington Post op-ed essay that she wrote about domestic violence. The trial, in that case, was recently delayed until April 2022. According to a report by Radar, the two actors were at a court hearing over the massive lawsuit filed by Depp against Heard for lying about donating $7 million USD to charity and for spoiling his reputation by accusing him of sexual violence in a tabloid. In March, a British court refused Depp permission to appeal the ruling that he assaulted Heard, saying his attempt to overturn the decision had “no real prospect of success.”

READ | Amber Heard says that she's the queen of Yoga with an Atlantean twist; Read On
READ | Fans trend 'Justice for Johnny Depp' as Amber Heard begins filming for 'Aquaman 2'
READ | From Khloe Kardashian to Amber Heard, here is a recap of top Hollywood posts from June 29
First Published: 3rd July, 2021 13:09 IST
SUBSCRIBE TO US