As Anthony Hopkins won the Best Actor for The Father at the Oscars, he celebrated his victory by dancing at home. Watch video uploaded by Salma Hayek


Anthony Hopkins won the Best Actor for The Father at the 93rd Academy Awards, which concluded on Sunday night, April 25. A few days after his win, Salma Hayek Pinault took to Instagram and dropped a video that gave a sneak peek into Anthony Hopkins' celebratory dance, post his big win. In the video, he grooved to classics and then hugged Salma Hayek Pinault. Sharing the same, the latter wrote, "Celebrating with the king his 2nd Oscar for his extraordinary performance in The Father." 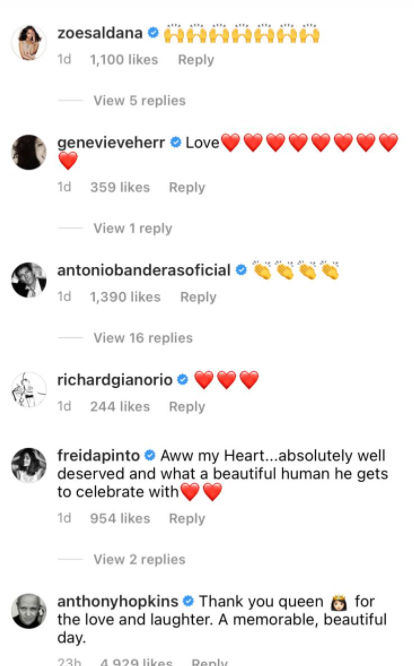 As soon as the video was up on the internet, Anthony replied, "Thank you queen for the love and laughter. A memorable, beautiful day." Genevieve Herr, Zoe Saldana, Antonio Banderas, Richard Gianorio, Pedrito Sola, among many others, congratulated the actor. Freida Pinto wrote, "Aww my Heart...absolutely well deserved and what a beautiful human he gets to celebrate with."

After the 83-year-old won the Best Actor Award at Oscars 2021, he explained the importance of acting in his life in his interview with The Sun. Anthony said that he is not a method actor and that he cannot sit in the corner imagining that he is someone else. Anthony remarked that he has a life of his own and acting for him is a "hobby, paid hobby" that he enjoys. He also added that he always tries to warn actors about the downside of fame and stardom.

Apart from this, the star also took to his Instagram to thank fans for showering love upon his venture. In his speech, he then paid tribute to late actor Chadwick Boseman, who was also nominated for his movie Ma Rainey's Black Bottom. "At 83 years of age, I did not expect to get this award. I really didn't. I'm very grateful to the Academy. Thank you. I want to pay tribute to Chadwick Boseman, who was taken from us far too early. And again, thank you all very much. I really did not expect this, so I feel very privileged and honoured, thank you," he said in the video.