Army Of The Dead: Did You Spot The Zack Snyder's 'Justice League' Easter Egg In The Film?

Army Of The Dead sees the director return to the zombie genre, on which he has built upon by including intelligent and organized zombies. Read on to know more. 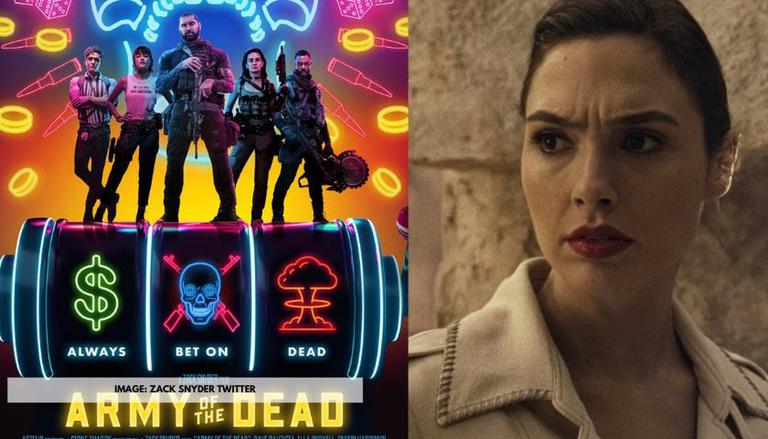 
Zack Snyder’s Army Of The Dead sees the director return to the zombie genre, on which he has built upon by including intelligent and organized members from the realm of the undead. But, on the subject of the undead, not many people have probably noticed that there is a reference to Zack Snyder's Justice League in the film, which only went by the name of the mythical “Snyder Cut” or “Justice League: Director’s Cut” at the time when the Snyder fandom, with no real possibility of the release of the said film in sight, was campaigning for the same.

One of the scenes involving the vault that has finally been cracked upon by the members of Las Vengeance gives the viewers of Army Of The Dead a blink-and-miss peak at the canisters which once housed the rejected reels of what eventually took the form of Zack Snyder’s four-hour-long magnum opus. The tweet, which sees a Twitter user making a meme out of the aforementioned easter egg, can be found below. One must look at the image on the left closely, and specifically in the top left section, to catch a glimpse of the canisters that held Zack Snyder's Justice League in its raw form.

A peek at the Snyder Cut Easter Egg in Army Of The Dead:

Literally me while watching this scene and noticing #SnyderCut canisters! #ArmyOfTheDead pic.twitter.com/Qsw6Es7PMo

While speaking to the officials at ET about what turned out to be an intelligent meta-joke and the turn of events that followed, as soon as the YouTube video crosses the 1 minute and 45-second mark, Snyder can be heard confirming the presence of the Snyder Cut easter egg in the film. Snyder, later on, admits that putting the canisters where he did was his idea. Additionally, while providing an insight into his state of mind at the time of him filming the Netflix original film, the director revealed that there was "no hope", "no real desire at all or inkling" that there might even be a Snyder Cut in the future. So, while looking back at the time, Snyder shared his amusement regarding how everything came together, solidifying his belief in the statement that "anything's possible".

READ | 'Army Of The Dead': Does the film have post credits scene? All you need to know

As is known to everybody, Army Of The Dead was shot nearly three years after Zack Snyder filmed a majority of his version of Justice League, but the latter ended up being released ahead of the Netflix Original film. The two feature presentations were released with a nearly two-month-long gap between each other. Zack Snyder's Justice League went on to become one of the highest-rated superhero movies ever, with an IMDb rating of 8.2 on IMDb. The Army Of The Dead ending, on the other hand, opens the doors for a sequel without explicitly setting up the same. Army Of The Dead review(s) on the other hand, has described the film as an "over-the-top actioner with a healthy dose of bloodshed".

As far as Army Of The Dead is concerned, Netflix capitalized on the Snyder Cut conversation by simply tweeting out that the version of AOTD that is going to be released on the platform of the streaming juggernaut is the director's cut. The tweet came in hours before the release of the actual film. The same can be found below.

READ | Who did Tig Notaro replace in 'Army of the Dead'? Was she digitally added to the film?

Hope you all love Army of the Dead! Oh, and before you ask...

this IS The Snyder Cut.