Blake Lively on her Instagram story shared a picture of her food. She stated that the dish is her self-portrait. Read on.

Like most Hollywood celebrities, Blake Lively and her husband Ryan Reynolds too have been in quarantine and are spending their time at home. Blake Lively took to her Instagram account and shared two pictures of the delicious snack meal that she had prepared. Blake Lively’s spread does not only look tempting, but she has created drama with the dish with 'blue waffles laid out in a round shape face', 'cream cheese eyes' and 'chocolate chip pupils'. She even added a Sesame Street reference in the dish while adding the finishing touches to it.

ALSO READ: Ryan Reynolds And Blake Lively Troll Each Other Over Hairstyles And Birth Control Pills 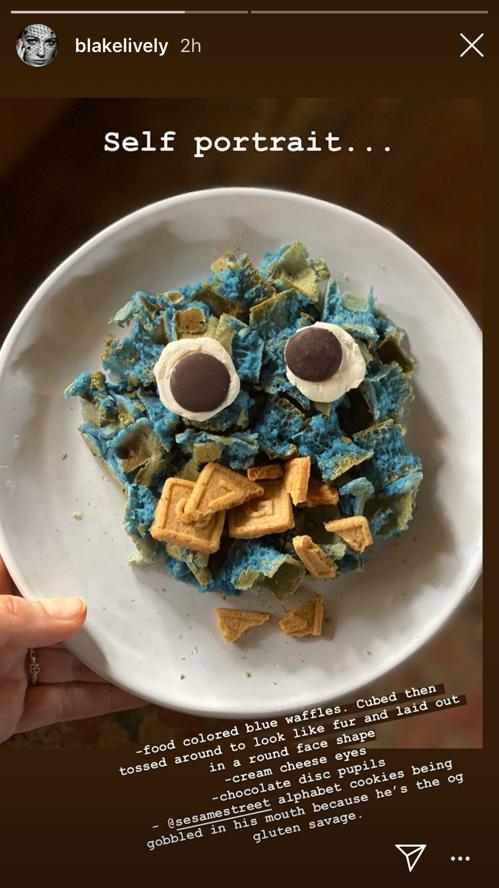 She mentioned in her post, ‘food coloured blue waffles. Cubed then tossed around to look like fur and laid out in a round face shape. Cream cheese eyes. Chocolate disc pupils.’ She further added a Sesame Street reference while finishing the final detail. Blake Lively wrote, ‘Sesame Street alphabet cookies being gobbled in his mouth because he’s the og gluten savage.’ Blake Lively added on more picture, which is similar to her last food dish. However, this time she did not perfect the cartoon character. While mentioning her own inconsistency. Blake Lively mentioned that she is still in her experimental phase. She wrote, ‘… This is what they mean by being in your “experimental phase”, right?’ {sic] 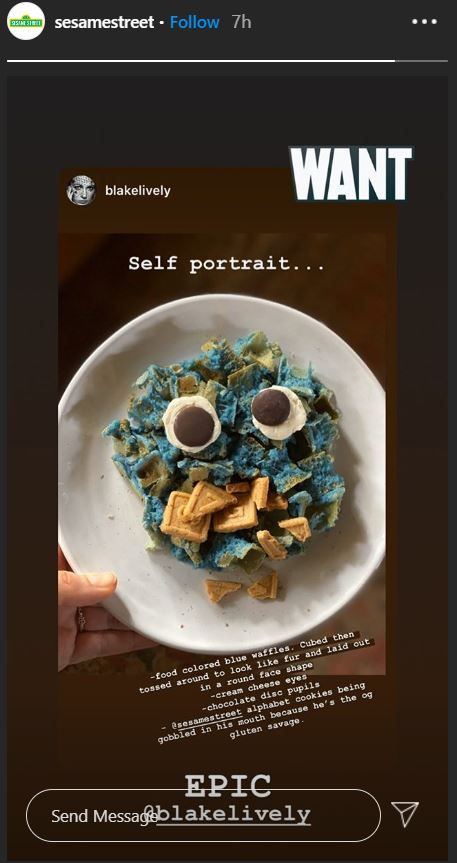 The official account of Sesame Street shared the picture shared by Blake Lively and stated that the food dish looks ‘epic’. They also added a ‘want’ sticker while posting the picture on the Instagram account. Blake Lively has been quarantining with her husband and their three daughters, James, 5, Inez, 3 and an eight-month-old daughter whose name the couple hasn’t revealed yet.

PEOPLE HAVE PLEDGED SO FAR
LATEST NEWS
View all
14 hours ago
Matt Damon & family travel back to California after being stranded in Ireland for 2 months
11 hours ago
Brad Pitt's movies that have been adapted from bestseller novels: Here are some of many
13 hours ago
'Tiger King' Joe Exotic requests pardon, says he is being ill-treated in prison; Read here
11 hours ago
When 'Twilight' star Taylor Lautner was almost replaced in 'New Moon'
10 hours ago
When Miley Cyrus slayed in designer ensembles by Ralph Lauren & more; See pics