Aaron Paul and his wife Lauren are expecting their second child together. 'We can't wait to meet you baby', Lauren wrote while making the announcement. 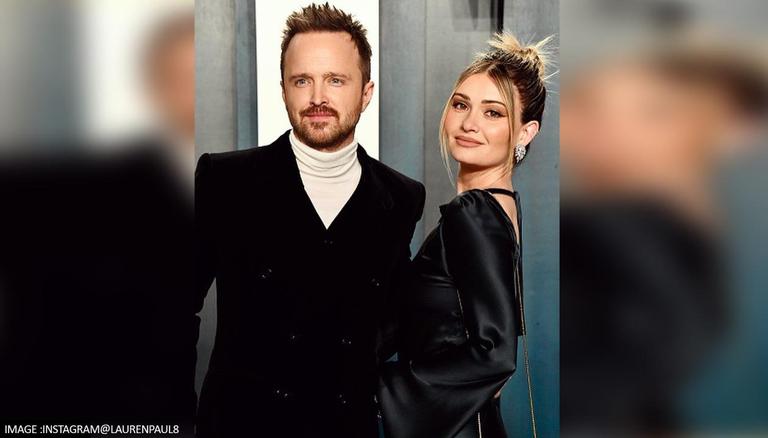 
Breaking Bad star Aaron Paul and his wife Lauren Paul are expecting their second child. The couple, who is already parents to a 3-year-old daughter Story Annabelle, broke the news on social media via Lauren's Instagram handle with an adorable picture of their daughter cradling Lauren's baby bump. "We can’t wait to meet you baby! We love you so much already", Lauren wrote while expressing excitement ahead of the new member's arrival.

Aaron Paul had earlier expressed his intention of expanding his family, noting that fatherhood had 'definitely changed' him. In a conversation with Haute Living last year, he noted that having a child is the 'closest thing to magic' and added that he now realises why people rush home to spend time with their little ones. He iterated that a parent doesn't want to miss 'any of it'.

Taking to her Instagram handle on Thursday, December 2, Lauren Paul uploaded a picture of her daughter cradling her baby bump in the backdrop of a fireplace. Lauren, who's dressed in a black sweatshirt and cap along with an olive-coloured lower, can be seen looking adorably at her daughter. She dedicated the caption to the newest family member, noting that they already love the baby and cant wait to meet it. Take a look.

According to reports, Aaron has earlier stated that parenthood has been 'the best chapter' of his life and makes him feel like he's in a 'good place'. He had also hinted at the possibility of having another baby, noting that he's super excited to see 'what 40 has to offer'.

Lauren and Aaron first met at the Coachella festival and got engaged shortly afterwards in 2012. They eventually tied the knot a year later in May 2013. On many occasions, Aaron has spoken about keeping their relationship intact after having children. He said that everything boils down to 'communicating their love for one another' and making the most of 'mommy-daddy time'. He stated that's it imperative for one to have 'private moments together' and that the actor would 'never let go' of the bond he shares with his wife.

WE RECOMMEND
Is Fortnite collaborating with American TV series 'Breaking Bad'? All you need to know
If 'Breaking Bad' is made in India, Netflix wants these characters to essay pivotal roles
R Madhavan starrer 'Breathe' took inspiration from the series 'Breaking Bad'?
'Breaking bad'ly: Delhi Chemist turn drug peddler to recover losses from lockdown, held
'Breaking Bad' actor Bob Odenkirk speaks about his favourite scene from the whole series
Listen to the latest songs, only on JioSaavn.com