Britney Spears Tries To 'get In Shape' As She Feels 'too Vulnerable' In Her Skin; Watch

American singer Britney Spears took to her social media handle and shared a video to explain she has been trying to be mindful with her food. Watch.


American singer-songwriter Britney Spears, on Tuesday, took to her verified social media handle and registered her latest entry to her reel feed. Interestingly, in the video, she can be seen posing in several different bikinis on artist Tundra Beats' song Perfect Day. In the caption, the pop star talks about being mindful about her nutrition lately as she tries to keep up with her fitness trainer boyfriend, Sam Asghari.

"In the past two weeks I've said that's it ... I have got to get in shape considering my boyfriend's body is hotter than hot", read the opening of her caption. The pop star continued and wrote, "I was like S— where the hell am I supposed to start / run a lot and try to eat clean and be mindful with my food unless I cheat, like last night when I ate a container of peanuts". Later speaking on the importance of feeling comfortable and confident over trying to fit a certain aesthetic, she added, "And then it hit me ... I might look better but I felt too vulnerable in my skin being this small !!!! I didn't like it so I started boxing so now I feel stronger too". Before concluding her caption on a funny note, she wrote, "We all have our own ways to work on our bodies and I respect that cause we all should".

Britney Spears talks about being 'Mindful' with food:

Within a couple of hours, the reel video managed to garner 700k double-taps, and is still counting. In the comments section, her fans and followers showered love on her. An Instagram user wrote, "Perfect queen at any size" while another added, "Britney is actually a pretty cool chic". The one-word compliments, such as queen, beauty, hot, among many others, were a common sight in the comments box. 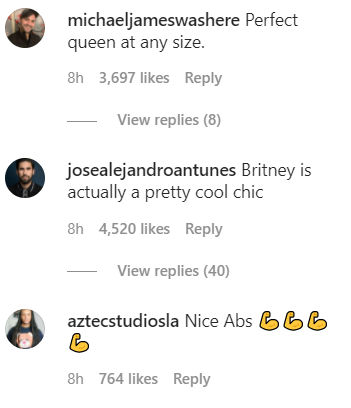 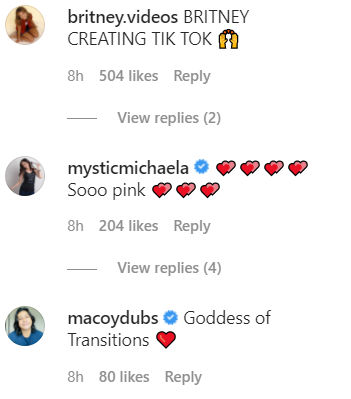 Interestingly, on Tuesday, Spears gave fans a peek into what she's been eating lately: a sandwich inspired by Schlotzsky's sandwich chain in New York. "Okay guys, so I'm here in my kitchen today and I'm going to make my first delicacy sandwich," Spears said in an Instagram video. The video gave a brief look into the step-by-step process of making the meal.