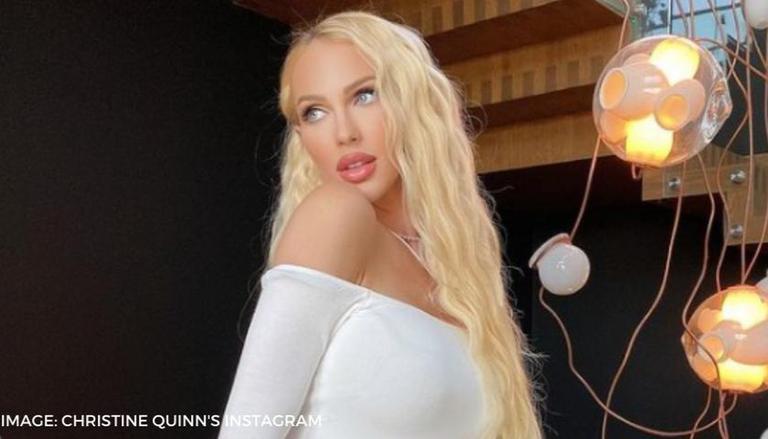 
The MTV Movie & TV Awards 2021 took place on May 17, 2021, in Los Angeles. The Selling Sunset cast hit the red carpet on Monday. One of the cast members, Christine Quinn stole the show as she arrived in a Cruella-inspired monochrome gown at the ceremony.

Christine Quinn steals the show in a Cruella-inspired monochrome gown

Christine Quinn who is going the have her first baby with Christian Richard was seen in a black and white short dress. She accessorized her look with dramatic skull finger jewellery, held a black clutch in her hand. She wore silver heels and flaunted her baby bump while flashing a glowing smile towards the camera.

Christine Quinn became famous on the Selling Sunset after delighting viewers with her "no BS" attitude and her fashion sense. She tied the knot with her husband, in a winter wonderland–themed ceremony held December 15, 2019, in Los Angeles. The star confirmed her pregnancy in February 2021. Speaking to People, she said that she is a firm believer in manifesting her dreams and she has always done so. The couple knew that they wanted to create a family in 2021 and she envisioned herself pregnant as she did her daily meditations. They are grateful to be expecting their first child and said, "I'm so ready for what this next chapter holds and cannot wait to be a mom!"

She previously also told the U.K. outlet Metro in August about her desire and her excitement to become a mother one day. She said that she loves kids and would love to have two boys. She cannot even imagine trying to tame her little child. She said, “I always wanted two little boys just because I'm actually quite a tomboy myself. ... I love all the boys stuff, I always have."

More about the Selling Sunset

Selling Sunset is an American reality television series created by Adam DiVello that airs on Netflix. The show revolves around a high-end real estate brokerage firm in Los Angeles and the story of a group of agents as they navigate their personal and professional lives. The show has recently been renewed for seasons four and five.