Actor Daniel Craig who recently impressed fans with his versatility in the latest release spy thriller 'No Time To Die', received Hollywood Walk of Fame Star. 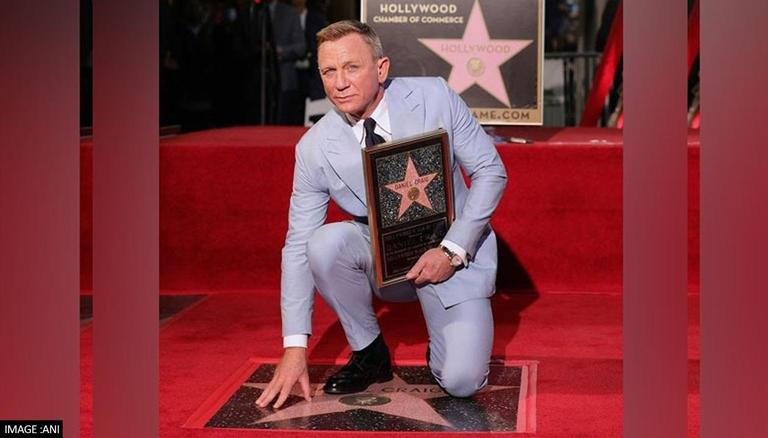 
Hollywood actor Daniel Craig recently impressed fans with his versatility in the latest release spy thriller No Time To Die. The actor whose tenure as 007 came to an end with the latest film, was recently honoured with the Hollywood Walk of Fame Star. The actor became the 2,704th celebrity to receive a star on the coveted Walk of Fame -- right next to legendary Bond actor Roger Moore. The 53-year-old received the star in the company of his 'No Time to Die' team members including Rami Malek on Wednesday night, reported Variety.

The actor who has a part of the popular franchise has played 007 since 2006. In his acceptance speech, the actor called it an ‘absolute honour’ to be walked all over in Hollywood. For the memorable event, Daniel looked dapped in a grey suit. He even posed for the paparazzi while flaunting his Hollywood Walk of Fame.

Sharing his thoughts on the honour, the actor in his acceptance speech said, “ I never thought I'd hear myself saying this, but it's an absolute honor to be walked all over in Hollywood. During the event, Rami Malek had paid tribute to Daniel by heaping praises on him. "If you are lucky enough to play a bad guy, you would better make sure the good guy is legendary. And this good guy is the best," Rami Malek said. The 53-year-old was introduced by Bond producers Michael G Wilson and Barbara Broccoli, along with his co-star Rami Malek in the latest 007 outings No Time To Die. The honour bestowed on the actor comes after the film No Time To Die won critical appreciation and earned the highest opening weekend takings of any Bond movie in the UK. Despite the delay in the release because of the Coronavirus pandemic, the film received much praise from the fans.

Malek, who won an Oscar for his portrayal of Queen singer Freddy Mercury in the movie Bohemian Rhapsody, plays supervillain Safin in the latest installment of Bond's adventures. The Hollywood Hall of Fame consists of stars with the names of several icons from the film industry. Each star in the Hall of Fame is an honour to the hard work and dedication the actor has put in for years on end. The stars had a beautiful tint of red and pink and rest on an elegant black background. The names of each actor are inscribed in gold.