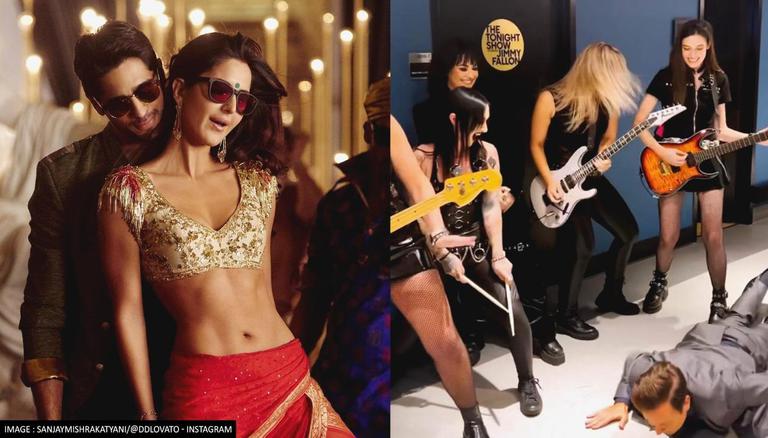 
Katrina Kaif and Siddharth Malhotra's highly popular song Kala Chashma has caught the attention of global celebrities like Demi Lovato and Jimmy Fallon, who were seen grooving to it in a viral social media video. Lovato, who recently appeared on The Tonight Show Starring Jimmy Fallon, shared a BTS clip where she and the host could be seen pulling off a small skit with the song playing in the backdrop.

The post received immense love from Lovato's Indian fans, who mentioned how 'special' it was to see a Bollywood song making its way internationally.

Taking to her Instagram handle on Thursday, August 18, the Heart Attack hitmaker shared a hilarious clip where Fallon tries to pull off a prank and falls down. He further rolls on the ground while grooving to the song. In the caption, Demi mentioned," @jimmyfallon you OK?" Take a look.

Reacting to the post, netizens dropped comments like, "Hindi song (Kala Chashma) in the background makes it special!! (sic)", "Omg the audio used is from Kala Chashma song, I love you, Demi (sic)", "Not Demi using audio from an Indian song.. queen (sic)", among other things.

Demi appeared on The Tonight Show to promote her latest album Holy Fvck and was also seen celebrating her 30th birthday which falls on August 20. They cracked some hilarious jokes and also indulged in fun games.

READ | Demi Lovato had to get stitches on face before appearance on Jimmy Kimmel Live
READ | Demi Lovato on why she started using she/her pronouns again: 'I didn’t feel like a man...'
First Published: 18th August, 2022 19:26 IST
SUBSCRIBE TO US