A rapper shared a video of Drake from the gym; fans are speculating that the toned abs that he has are not real but because of surgery.


Rapper Drake is on his road to recovery after his knee surgery and has been hitting the gym with a bunch of friends. One of his rapper buddies Baka took to their Instagram feed recently and shared a video of the God’s Plan singer, and followers are flooding it with speculations that he has got the surgery done and the abs are not real. Read along and take a look at the video and reactions, here.

Baka Not Nice, who is one of the rappers who signed on to Drake’s label shared the clip of the rapper from the gym. The latter asked Drake to slow down, which was followed by a series of high fives and fist bumps. The rapper was shirtless and wore grey sweatpants with a pair of purple shoes.

The post which has received over 106k views since it was shared on the social media platform, has a mix of comments under it. While most of the fans went on to appreciate the singer for his toned body and ab-cuts, some of them have also speculated about him getting plastic surgery done. While one of them wrote, “Drake all surgery,” another one wrote, “He needs to let us know who that lipo doctor is cause they did a good job”. Take a look at the screenshots of some of the comments under the post here. 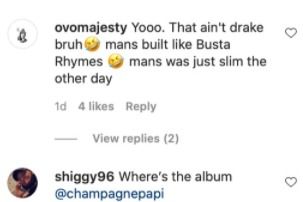 Alongside, some of the fans couldn’t bother about anything else but when the much-loved rapper was dropping his next album, as they asked in the comments. On the work front, Drake had dropped the sequel of his extended play, Scary Hours on Friday, March 5, 2021. It consisted of three songs, which were What’s Next, Wants and Needs and Lemon Pepper Freestyle all of which ranked at the first, second and third positions on the Billboard Hot 100 list. The rapper will also be releasing his next album Certified Lover Boy in the ongoing year; it was earlier slated to release in January 2021 but was pushed following Drake’s knee injury.