Red Notice featuring Dwayne Johnson, Gal Gadot & Ryan Reynolds is one of the upcoming action movies on Netflix. Check out its release date. 
Red Notice is one of the highly anticipated movies of the year that will feature Dwayne Johnson, Ryan Reynolds and Gal Gadot in the lead. Dwyane Johnson recently unveiled the Red Notice release date and shared a note of gratitude to Netflix, the creator of the film as well as his co-stars from the movie. The moment he posted it on social media, all the fans were thrilled with the news and showered his post with love.

Taking to Instagram, Dwyane Johnson posted a glimpse of himself along with his Red Notice cast members in his latest photo. In the caption, he stated how he was officially serving his fans their notice and presented ‘Netflix’s biggest movie ever’. He further stated that the movie will premiere in his fans’ ‘living room around the globe on November 12.’ Escalating the fans’ curiosity, the actor also gave a sneak peek at the leading characters from the Red Notice cast and stated that it consisted of an FBI’s top profiler, the world’s most wanted art thief and the greatest conman the world has ever seen.

Dwayne Johnson then shared a thank you note to their partners at Netflix ‘ for the trust and vision to commit to their biggest investment ever.’ Further, he thanked his good friend ‘the creator, writer and director’ of the film, Rawson Marshall Thurber along with the ‘insanely talented and highly unattractive’ costars, Gal Gadot and Ryan Reynolds for their ‘globetrotting heist’. In the ned, he shared a note of gratitude to the 205+ Million Netflix subscribers who were already making Red Notice the most highly anticipated movie on the platform in 2021. Speaking further about his film, he stated, “This is my career first streaming film and I wanted to make it big and special for all the fans worldwide. This one’s for all of you and I’ll see you in November!.”

Dwayne Johnson’s post not only left the fans excited but also created a buzz among other celebrity artists. Numerous fans took to Instagram and dropped in hearts and heart-eyed emojis to depict how delighted they were for the release of the movie. Many celebrities namely Senada Greca and others added complimented stating how the crew of the film was amazing. Take a look at some of the reactions to the Red Notice release date. 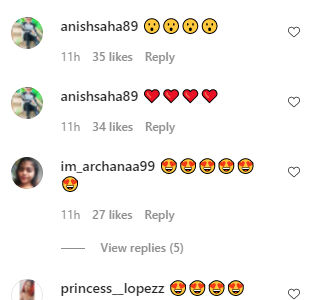 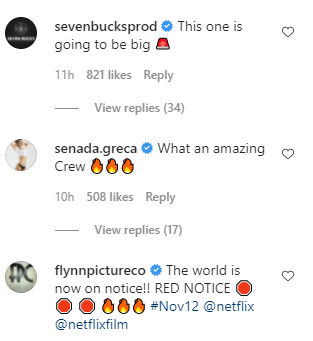