Emily Ratajkowski recently took to her Instagram handle and shared an intimate picture of breastfeeding her newborn son Sylvester. See the picture here.

Emily Ratajkowski has not shied away from sharing her journey of motherhood with her fans on social media. Since her pregnancy days, the model-actor has shared several pictures flaunting her baby bump for her 27.2 million strong Instagram family. The 29-year-old recently announced the birth of her baby boy on her Instagram with an adorable picture of her breastfeeding him. She has once again shared an intimate picture with her newborn son on her Instagram that is going viral on social media. Here is a look at Emily Ratajkowski's Instagram post.

As soon as she shared the picture on her Instagram, her fans flooded the comments section of the post. Various fans and celebrities dropped in heart emojis to react to the picture while several others praised the beautiful boy and his mother. Various celebrities like Irina Shayk, Poppy Delevingne, Chantel Jeffries, Halsey, Ashley Graham, Adwoa Aboah took to the comments section and praised the mother-son duo. Here is a look at how netizens and celebrities reacted to Emily Ratajkowski's Instagram post. 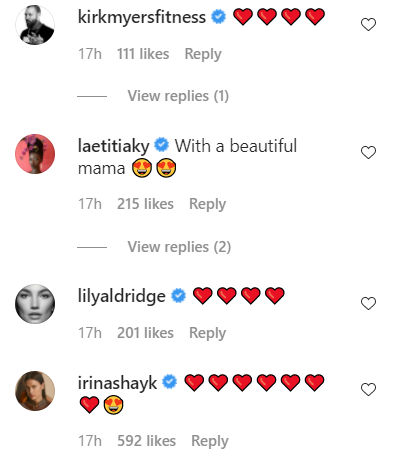 READ | Emily Ratajkowski flaunts her baby bump in a golden bikini; writes 'Angel in my belly'

She captioned the picture as “Sylvester Apollo Bear has joined us earth side. Sly arrived 3/8/21 on the most surreal, beautiful, and love-filled morning of my life.” Various celebrities took to the comments section and congratulated her on becoming a mother. She has also shared another post on her Instagram which is a collage of her first moments with her son Sylvester. Here is a look at Emily Ratajkowski's photos.

READ | Emily Ratajkowski flaunts her baby bump as she strolls down a street; says 'bout to pop'