Emma Stone Finds Similarities Between 'Estella' & 'Cruella'; Says 'humans Have All Within' 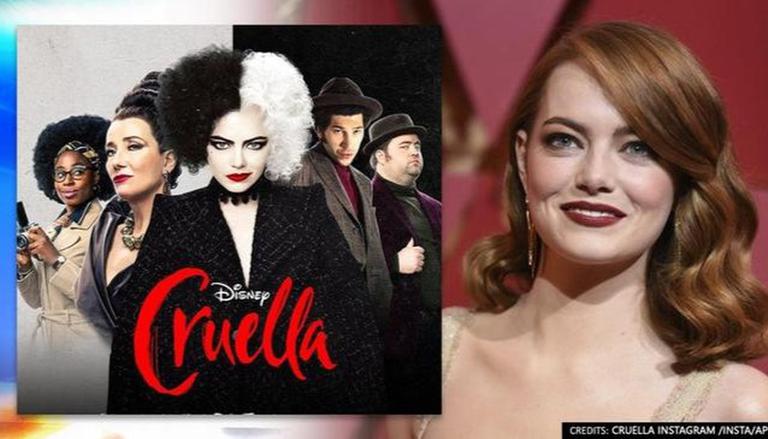 
Emma Stone was recently seen in the titular role of Estella Miller also known as Cruella de Vil in Disney's Cruella. Stone received praise for her performance in the movie. The actor recently opened up about her role and shared the challenge she faced while filming the shift of the personality between Estella and Cruella.

Emma Stone talks about her role in Cruella

The movie is set in London during the punk rock movement of the 1970s, the film revolves around Estella Miller (Stone), an aspiring fashion designer, as she explores the path that will lead her to become a notorious up-and-coming fashion designer known as Cruella de Vil. Stones role was based on the character Cruella de Vil from Dodie Smith's 1956 novel The Hundred and One Dalmatians. Talking about the different personalities of Estella and Cruella, Stone in a statement given to ANI said, "It's been fantastic. How much of Cruella is in Estella, and how much of Estella is in Cruella? I think it is interesting to think about whether Cruella is part of her, or the real her, or whether it's some of the tragic events that shape her life, and shape Cruella."

She added, "I think part of what the story is saying is, every human being has all of it within us, and we can access all these different parts, but different events do happen to us that can bring certain things out. I think It's a series of events that have happened to her, and some of it is just kind of deep in there, and she's accepting it rather than fighting it." The movie was released theatrically on May 28, 2021. The movie is slated to release in India on August 27 on Disney+ Hotstar in English, Hindi, Tamil, and Telugu.

The cast of Cruella also includes Emma Thompson, Joel Fry, Paul Walter Hauser, Emily Beecham, Kirby Howell-Baptiste, and Mark Strong in supporting roles. It is the third live-action adaptation in the 101 Dalmatians franchise and serves as both a prequel and reboot to the film series. Emma Stone is all set to reprise her role of Cruella in a sequel of the movie.

READ | Emma Stone Confirmed for 'Cruella 2'; Here's everything we know about the release date

WE RECOMMEND
Emma Stone Confirmed for 'Cruella 2'; Here's everything we know about the release date
Emma Stone 'weighing options' to sue Disney following Scarlett Johansson's lawsuit
When will Cruella release on OTT in India? Here are all the details of this film
Emma Stone reveals why Cruella De Vil does not smoke in Disney's 2021 film 'Cruella'
Emma Stone reveals how she practised her 'Cruella' laugh in the shower