Chrissy Teigen made heads turn at Emmys 2022 in her pink sequin gown, perfectly showcasing her baby bump as she arrived with husband John Legend. 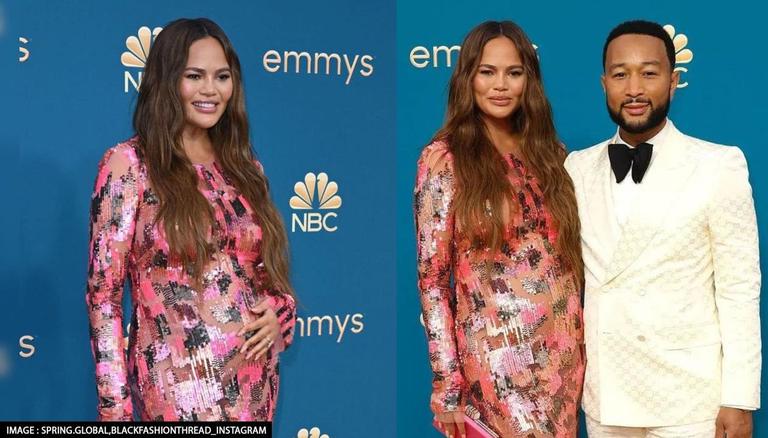 
The Emmy Awards 2022 saw who's who of the entertainment industry grace the red carpet in ultra-glamorous looks. Among the trail of celebrities, model Chrissy Teigen made heads turn in her pink sequin gown, perfectly showcasing her baby bump as she arrived with her singer husband John Legend. Chrissy's Emmys 2022 appearance also marks her first public outing ever since she announced her pregnancy in August.

In glimpses making rounds on social media, Chrissy is seen in a sequined long-sleeved pink gown with a matching clutch to accentuate her look. Meanwhile, John Legend accompanied her in a stunning white all-white look as he cradled his wife's baby bump. Take a look.

John Legend and Chrissy Teigen arrive at the #Emmys. pic.twitter.com/UD0WaKVOak

Chrissy announced her pregnancy in a heartfelt Instagram post, mentioning that she's feeling 'hopeful and amazing.' She wrote, “the last few years have been a blur of emotions to say the least, but joy has filled our home and hearts again. 1 billion shots later (in the leg lately, as u can see!) we have another on the way. Every appointment I’ve said to myself, “ok if it’s healthy today I’ll announce” but then I breathe a sigh of relief to hear a heartbeat and decide I’m just too nervous still. I don’t think I’ll ever walk out of an appointment with more excitement than nerves but so far, everything is perfect and beautiful and I’m feeling hopeful and amazing. Ok phew it’s been very hard keeping this in for so long!” (sic)

For the unversed, Chrissy and John lost their third baby, Jack, in September 2020 after she suffered pregnancy complications. The couple is parents to two children: Luna, 6, and Miles, 4.