After appearing in 'Eternals', Salma Hayek revealed that she has signed 'multiple movie deals' with Marvel, hinting at her appearance in their future projects. 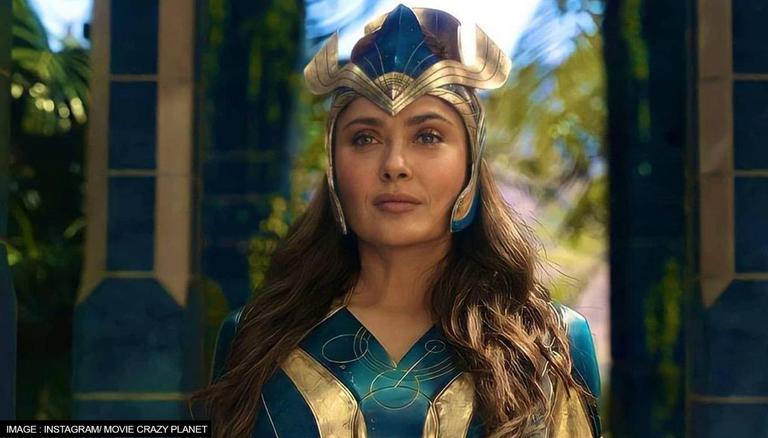 
After marking her Marvel debut with the recently released Eternals, Salma Hayek has confirmed that she signed myriad movie deals with the studio. Hayek, who appears as the leader of a group of immortal superbeings- Ajak, revealed that although she could reprise her role in the upcoming blockbusters, nothing is confirmed yet. In a recent appearance on Smallzy's 'Celebrity Small Talk, she iterated that the makers aren't obliged to 'put me in it'.

She also noted that it was 'fun' being a part of the 'secret society' that one has to protect so fearlessly. The Oscar nominee refrained from spilling further details, considering Marvel's extremely secret way of working. Other pertinent personalities who have worked with the studio have signed similar long term deals just in case they reprise their roles in the future.

The 55-year-old played the matriarch of the superheroes in the movie, which has joined the likes of Black Widow and Shang-Chi and the Legend of the Ten Rings to become the latest instalment in Marvel Cinematic Universe's phase four. Her character's gender has been swapped from the original Eternals comic and is seen guiding the fellow cosmic beings through their seven thousand-year-old journey on Earth. Despite her tragic fate in the movie, the recent update quips that it may not be the end of her journey in the Marvel universe.

Hayek further mentioned that she is learning to cope with Marvel's ardent fan following that "terrified" her at first. During her Comic-Con visit, Hayek mentioned that she had never seen theatres packed with so many passionate people inside, waiting to get any update regarding the future of the Marvel Universe. Hayek didn't want to 'disappoint' the 'loyal' fanbase, considering that she was a 'man in the comics'.

For the unversed, the film chronicles the Eternals, an immortal alien race, as they emerge from hiding after thousands of years to protect Earth from their evil counterparts, the Deviants. It also stars Gemma Chan, Richard Madden, Brian Tyree Henry, Angelina Jolie, Kit Harington, Salma Hayek, Don Lee, Lauren Ridloff, and others in pivotal roles.

WE RECOMMEND
'Eternals' to not release in Saudi Arabia, Qatar, Kuwait, Bahrain and Oman; Here's why
'Eternals' to release on Nov 5; How and where to watch Angelina Jolie-starrer online?
Eternals actor Kumail Nanjiani impressed with Bollywood-inspired poster featuring him
Who is Kit Harington in 'Eternals'? All we know about Harington's Marvel role
'Eternals' star Harish Patel shares views about sequel, says 'I'll definitely be a part'
Listen to the latest songs, only on JioSaavn.com