'Fifty Shades of Grey' actors Dakota Johnson and Jamie Dornan reunited at the 48th Telluride Film Festival. The duo attended the screening of their movies. 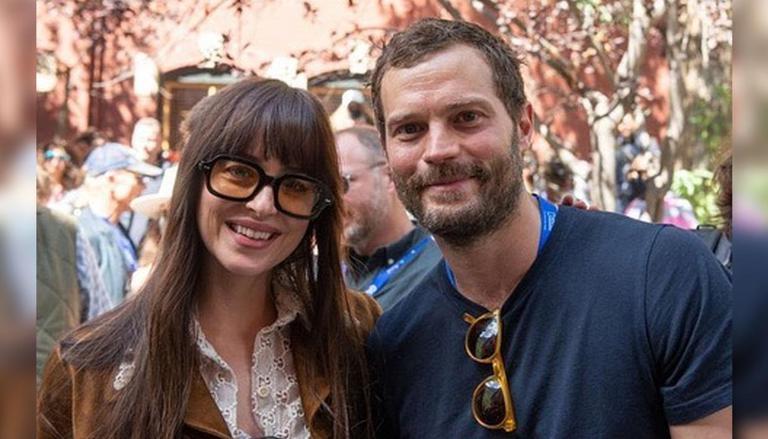 Johnson sported a 70s-inspired look for the event, pairing a white top with a suede brown jacket and wide-leg jeans and used a pair of sunglasses as her accessorize. Meanwhile, Jamie kept it casual in a navy blue t-shirt and light grey coloured trousers. Dornan attended the screening of his movie Belfast which is a British-Irish black-and-white coming of an age drama film. It also stars Caitríona Balfe, Judi Dench, Jamie Dornan, Ciarán Hinds, Colin Morgan, and newcomer Jude Hill. The movie had its world premiere at Telluride Film Festival and will also screen at the 2021 Toronto International Film Festival on 12 September 2021

READ | Movies like 'Fifty Shades' if you liked the romance film; from 'Love' to 'Addicted' & more

Johnson attended the screening of her drama film The Lost Daughter that also stars Olivia Colman, Jessie Buckley, Peter Sarsgaard, Oliver Jackson-Cohen, Paul Mescal, and Ed Harris. The movie focuses on the story of a woman, who, on a summer holiday, finds herself becoming obsessed with another woman and her daughter, prompting memories of her own early motherhood to come back and unravel her.

Jamie and Dakota paired for the first time for the first instalment of the erotic romantic drama film trilogy Fifty Shades series. The film is based on E. L. James’ 2011 novel of the same name and stars Dakota Johnson as Anastasia Steele, a college graduate who begins a sadomasochistic relationship with young business magnate Christian Grey, played by Jamie Dornan. Despite the franchise receiving negative reviews, all the three movies Fifty Shades of Grey, Fifty Shades Darker and Fifty Shades Freed were commercial successes. As per Deadline, the series grossed over $1.32 billion worldwide, making it the seventh highest-grossing R-rated franchise of all time.