'Friends Reunion': Iconic Scenes That The 'Friends' Cast Reenacted On The Special Episode

Friends Reunion is a special episode in which the cast take a trip down memory lane and reenact older Friends episodes. Read ahead to know more. 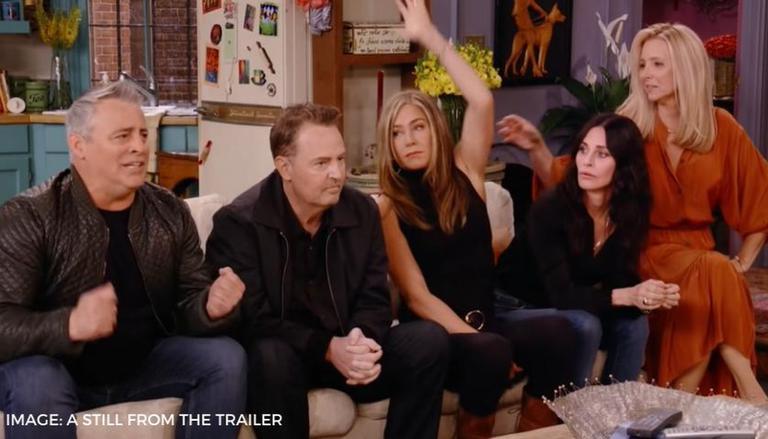 IMAGE: A STILL FROM THE FRIENDS TRAILER


Friends Reunion is a special episode of the American sitcom series Friends where the lead cast revisit the sets of the original show. The much-awaited episode was released on May 27, 2021, in which Jennifer Aniston, Courteney Cox, Lisa Kudrow, Matt LeBlanc, Matthew Perry and David Schwimmer among others take a trip down the memory lane and also reenact older Friends episodes while sharing BTS footage. Here’s a list of the iconic scenes that the Friends cast reenacted on Friends Reunion.

Iconic scenes that the Friends cast reenacted on Friends Reunion

Lisa Kudrow played the character of Phoebe Buffay on the show who sang songs at the Central Perk where Rachel initially worked as a waitress. One of her most popular songs is Smelly Cat and Lisa sang this song again on the reunion episode and also wore an outfit similar to what Phoebe had on the saw. She sat on the couch and played the song with a guitar in her hand.

Matt LeBlanc recreated one of the most iconic scenes from the show in which Joey wears all of Chandler’s clothes. At the reunion, he appeared from behind the curtains and wore all clothes that he had worn while filming for the episode. On looking at him, the cast stood up in surprise and started laughing hysterically.

READ | 'FRIENDS': All you need to know about 'FRIENDS' star Matthew Perry's net worth & earnings

The cast gathered on Monica’s couch to play the lightning rod game that they often played on the show. David Schwimmer plays the role of the host and asks the gang about the letter that Rachel had written to Ross and how long it was. The members answer promptly and have a fun time during the game.

David and Jennifer make fans reminisce about the time when Rachel and Ross confessed their feelings to each other. During the reunion episode, they were seated at Monica’s table and enacted the scene. They got annoyed with each other for not confessing their feelings earlier and how things have gotten complicated now.

READ | FRIENDS Reunion: Fans freak out as Jen-David confess to crushing on each other

Matt LeBlanc and Matthew Perry on the Barcalounger (Rosita)

Joey and Chandler spent a lot of time on their reclining chairs in the show. Matt and Matthew recreated the moment in the latest episode as they relaxed on the chairs with the same reaction. Joey named the chair Rosita that Rachel broke.

READ | 'FRIENDS': All you need to know about 'FRIENDS' star Lisa Kudrow's net worth

Lisa Kudrow in The One Where Everyone Finds Out

Lisa Kudrow reenacted a moment from the episode The One Where Everyone Finds Out during the table read. In the original episode, she sees Monica and Chandler hooking up in Monica's apartment and starts yelling "My eyes, My eyes". Lisa recreated the same expression in the Reunion episode.

READ | FRIENDS: How old is Mr. Heckles? Know details of this actor & his time on the show

Gathered at the iconic fountain location

The Friends reunion cast revived the iconic fountain location in this episode. At the beginning of the episode, the fountain featured in the opening credits where the theme song I'll Be There For You played out over the top of the sequence. All dressed up, the star-studded cast gathered around the famous fountain and made a comeback to the location which became iconic for the show.

(IMAGE: A STILL FROM THE FRIENDS TRAILER)