As we wait for 'Harry Potter 20th Anniversary: Return to Hogwarts' special reunion episode, here is a list of all the 8 Harry Potter movies in order. 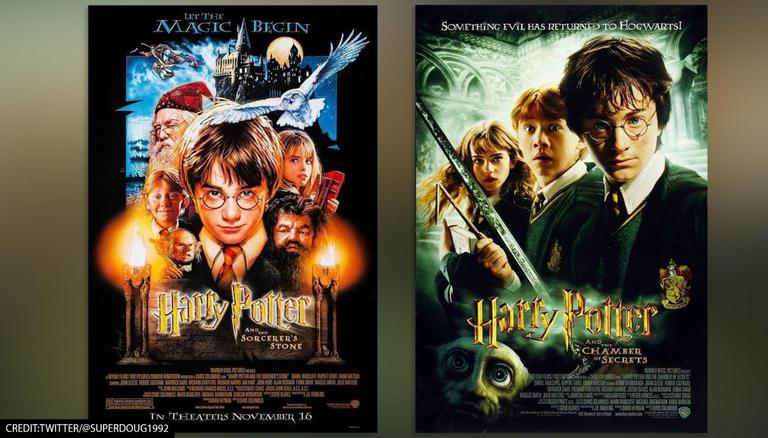 
Potterheads across the globe couldn't contain their joy as the much-awaited reunion special including the Harry Potter film franchise's cast is set to commence streaming in January next year. The franchise garnered the immense popularity that it claims today predominantly owing to the best selling fantasy novels on which they are based. The novel series penned by renowned author J.K Rowling comprises 7 books, whereas the live-action adaptation was released in 8 instalments. All of the Harry Potter films have been successful financially and critically, making the franchise one of the major Hollywood "tent-poles" franchises.

The movie franchise stars Daniel Radcliffe, Rupert Grint, and Emma Watson as the three lead characters: Harry Potter, Ron Weasley, and Hermione Granger. The cast of the Harry Potter franchise is all set to reunite for the upcoming 20th-anniversary special titled Harry Potter 20th Anniversary: Return to Hogwarts. As fans await the reunion special episode's release, here is a list of all the Harry Potter movies in chronological order.

The first movie in the franchise introduces Harry Potter, who is an orphaned boy brought up by his unkind Muggle (non-magical) aunt and uncle. At the age of eleven, half-giant Rubeus Hagrid informs him that he is actually a wizard and that his parents were murdered by an evil sorcerer going by the name Lord Voldemort. The movie documents Harry's first year at Hogwarts School of Witchcraft and Wizardry where he meets fellow wizards Ron Weasley and Hermione Granger.

Harry, Ron, and Hermione return to Hogwarts for their second year and attempt to solve the mystery of the Chamber of Secrets that is now opened by a mysterious entity. Harry must face up to claims that he is the heir of Salazar Slytherin (founder of the Chamber) and learns that he can speak Parseltongue that was once spoken by the Dark lord.

Harry's third year in Hogwarts brings him face to face with a convicted criminal named Sirius Black who has escaped from Azkaban, the wizarding prison. Harry learns more about his past and his connection with the escaped prisoner and encounters new professor of Defence Against the Dark Arts, Professor R. J. Lupin.

During the fourth year, Hogwarts plays host to the legendary magic event: The Triwizard Tournament. Three of Europe's top magic schools partake in the tournament, with three 'champions' representing each school in a series of deadly tasks. The Goblet of Fire chooses Fleur Delacour, Viktor Krum, and Cedric Diggory to compete against each other. However, Harry's name is also produced from the Goblet making him a fourth champion. The movie navigates as Harry, Ron and Hermoine try to figure out who put Hary's name in the goblet. The movie ends as Harry has a terrifying encounter with a now reborn Lord Voldemort.

#CurrentlyWatching Harry Potter and the Goblet of Fire (2005)

With the increasing threat of Lord Voldemort and his army of Death Eaters, Headmaster Albus Dumbledore persuades wizards to constitute the Order of Pheonix. Harry becomes aware that Voldemort is after a prophecy that reveals: "neither can live while the other survives."

As Lord Voldemort grows stronger and infiltrates the Ministry of Magic, Dumbledore and Harry secretly collaborate to discover the method on how to destroy the Dark Lord once and for all. Meanwhile,  Draco Malfoy struggles to carry out a mission presented to him by the Dark Lord.

Turns of unexpected events leave Harry, Ron and Hermoine to fend for themselves and search for the secret to Voldemort's immortality, the Horcruxes. The trio tries to locate each object linked to the Dark Lord's immorality and destroy them one by one. The journey leads to the loss of several loved ones in the franchise.

After destroying one Horcrux and discovering the significance of the three Deathly Hallows, Harry, Ron and Hermione continue to seek the other Horcruxes in an attempt to destroy Voldemort. The Dark Lord discovers Harry's hunt for Horcruxes and launches an attack on Hogwarts School, where the trio return for one last stand showdown between Harry and Voldemort.