Jennifer Aniston took to her Instagram and asked her fans to choose their favourite hairstyle from a series of looks from some of her previous movies. 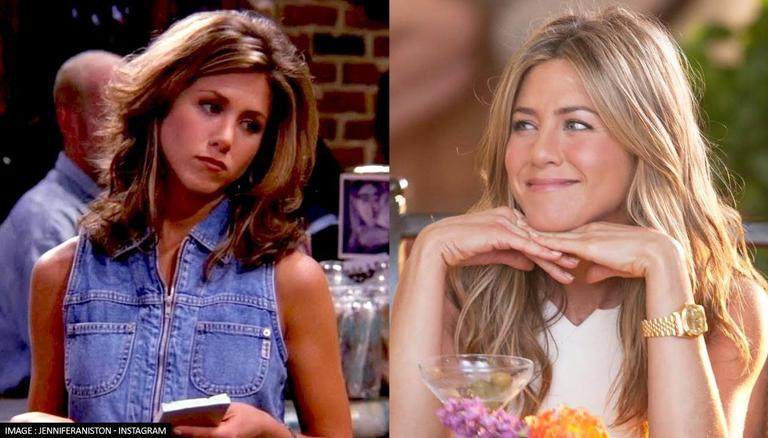 
Friends star Jennifer Aniston took a stroll down memory lane as she shared a series of her looks from some of her previous movies and shows and asked fans to pick their favourite hairstyle. The post included Aniston's looks from her movies and shows like Horrible Bosses, Just Go With It and Friends. Aniston is currently seen as anchor Alex Levy on The Morning Show.

Jennifer Aniston took to her Instagram and shared a series of photos from her previous shows and movies and asked fans to pick their favourite. The pictures included Aniston's look from movies like Horrible Bosses, Just Go With It, Marley & Me and her iconic hairdo as Rachel Green from her show Friends where she played the role of Rachel Green. As she shared the post she wrote, "choose your player, hair edition."

Jennifer Aniston was recently seen in the reunion special of Friends titled Friends: The Reunion. The special saw the main cast- Courteney Cox, Lisa Kudrow, Matt LeBlanc, Matthew Perry and David Schwimmer, revisit the sets of the original show such as the Friends' apartments, the Central Perk coffee shop, and the signature water fountain. The cast also met with guests who appeared on the show as well as celebrity guests. All the main cast including Aniston served as executive producers on the show.

Aniston is currently seen in the television drama series The Morning Show. The series also stars Reese Witherspoon, and Steve Carell in lead roles. The series is inspired by Brian Stelter's book Top of the Morning: Inside the Cutthroat World of Morning TV. Aniston plays the role of Alex Levy, an anchor on a popular breakfast news program. It is her first main television role since the conclusion of Friends in 2004. Season 2 of the show premiered on September 17, 2021. Jennifer was nominated for a Primetime Emmy Award for Outstanding Lead Actress in a Drama Series and two Golden Globe Awards for Best Actress – Television Series Drama and Best Television Series – Drama as the series' producer.

WE RECOMMEND
Jennifer Aniston turned down THIS film to do a 'romantic comedy once a week' on 'Friends'
US Assistant Health Secretary Rachel Levine becomes 1st transgender four-star officer
Jake Gyllenhaal reveals filming with Jennifer Aniston was 'torture'; Here's why
Here's how Jennifer Aniston learned about the rumours of her dating David Schwimmer
Jennifer Aniston on Texas Abortion Law; James Gunn’s DCEU project| H'wood Recap for Oct 4
Listen to the latest songs, only on JioSaavn.com