Kate Beckinsale in an Insta post revealed that Harvey Weinstein scolded her for not wearing a "tight dress". Kate also talked about Harvey's jail term.

Beckinsale recalls being scolded by Weinstein

Miramax founder Harvey Weinstein was recently found guilty of sexual assault and third-degree rape by the Manhattan Courthouse. The fallen movie mogul has been sentenced to 23 years’ jail term for these two crimes. This conviction is being considered a major victory for the #MeToo movement.

The Underworld actor said that Weinstein invited her (Kate) and her less-than-two-year-old daughter for a play date with his daughter. Kate continued by stating that once she reached Weinstein’s house and the nanny escorted her daughter to meet Weinstein’s daughter, the movie mogul started shouting at her.

After listening to Weinstein's outrage, Kate Beckinsale tried to reason with him and said, “Harvey, the city is on fire, people are still looking for their relatives, none of us even felt the premiere was much less coming out dressed like it’s a bachelor party.” Weinstein allegedly replied that he does not care and also said that it is his premiere and he gets what he wants. Kate Beckinsale in her Instagram post also added that she was punished for going against the movie mogul several times. The Underworld actor then concluded her post by saying that it is a “huge relief” that Weinstein has gone to prison for 23 years. Take a look at Kate Beckinsale’s entire Instagram post here. 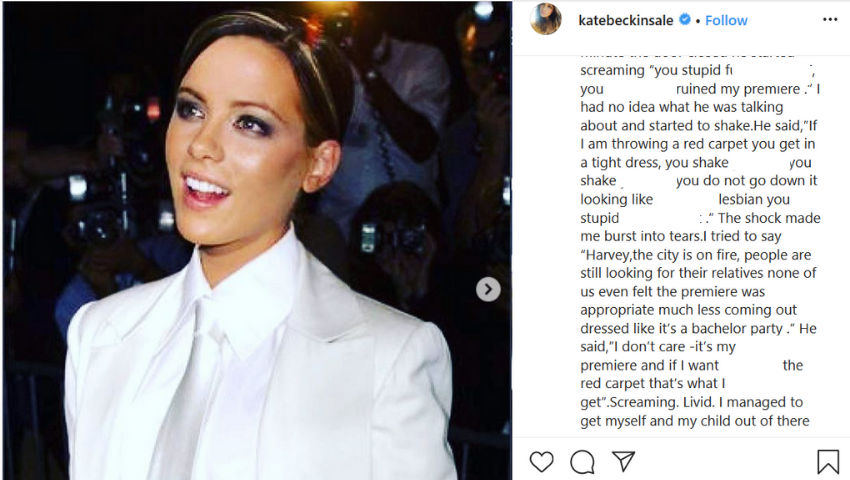